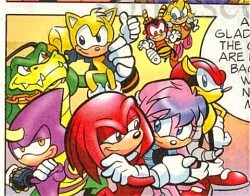 The Chaotix is a group of Mobians which act as Knuckles the Echidna's assistance as Guardian of エンジェル Island. The group was originally formed when Knuckles required help in defeating Metal Sonic, after the Knothole Freedom Fighters were all captured. All of its members are close フレンズ with Knuckles, または else with a member who is a close friend of Knuckles', and one of them, Julie-Su, is dating him. The Chaotix have resided part time in both Knothole and New Mobotropolis, helping the Kingdom of Acorn battle the Eggman Empire and other threats. Since the death of Locke, they have スプリット, 分割 their duties between the war and protecting エンジェル Island from outside threats.

[i]Formation and Early Activities-
The Chaotix was formed when Dr. Ivo Robotnik's lackey Renfield Rodent had successfully captured the Knothole Freedom Fighters in the House of Mirrors section of Happy Land theme park. Knuckles, requiring assistance to defeat Metal Sonic, joined up with Mighty the Armadillo, Espio the Chameleon, Vector the クロコダイル, ワニ and Charmy Bee. After their success of capturing Renfield Rodent and forcing Robotnik to flee the island, the Chaotix remained a team. (KCX)

Their early missions included battling the evil Enerjak, who at the time was also Knuckles' great-uncle Dimitri the Echidna. Enerjak managed to place the Chaotix under mind control, but they were freed from this following Enerjak's defeat. The group also 塔の上のラプンツェル with a band of cyborg Echidnas known as the Dark Legion. A defector from that group eventually joined them, Julie-Su, who would later become Knuckles' girlfriend. Charmy Bee temporarily left the group to return ホーム to the Golden Hive Colony. (KtE: #1, #2, #3, #4, KMS: #1, #2, #3)

Assisting Knuckles-
The Chaotix assisted Knuckles during his protection of エンジェル Island. When Robotnik sent a group of Burrobots to the island while on board the Death Egg, the Chaotix ensured that the other citizens of the island were protected. (SQM: #1, #2, #3)

When Reinfield T. Rodent re-emerged and Charmy Bee's friend Mello died from unknown causes, the Chaotix investigated the theme park, as Knuckles was occupied helping the ロスト Tribe locate Albion. It was soon discovered that Downtown Ebony 野ウサギ, うさぎ had taken over the operation, and was putting a poisonous sauce on the 食 so that people would keep coming back to the park. After being poisoned the first time and spending time recovering in a hospital, the Chaotix returned and shut down Ebony Hare's operation. (KtE: #13, #14, #15)

Alliance with the Freedom Fighters-
Following Knuckles's death and subsequent rebirth, the Chaotix moved to Knothole Village to serve the Kingdom of Knothole, becoming a larger team with the Freedom Fighters. The group also expanded with the addition of Charmy's girlfriend Saffron-who, along with Charmy, joined up with the Chaotix after the Golden Hive Colony was destroyed-and Rouge the Bat. They participated in multiple battles against enemies including the Metal Sonic Troopers, Mammoth Mogul, Ixis Naugus, and the Destructix. However, all of them except Kunckles were captured によって Dr. Eggman during Knothole's destruction and transported to the Egg グレープ, ブドウ Chamber along with most of the Knothole Freedom Fighters. Both groups were later freed and taken to the city of New Mobotropolis in a rescue mission devised によって NICOLE, and the Chaotix joined the Freedom Fighters in destroying Dr. Eggman's Egg Beater. When they learned of Enerjak's rebirth, they tried to fight their way free of New Mobotropolis to reach エンジェル Island and Knuckles, who had left sometime earlier to return and help his father Locke, but were convinced to stop によって the Freedom Fighters. (StH: #118, #138, #158, #159, #163, #164, #175, #176, #177, #178, #180)

Agreeing to stay in New Mobotropolis to help them against Enerjak, the Chaotix were among the group that rushed to meet the new Enerjak when he arrived. Unfortunately, they were also the first to learn the truth behind their old foe's rebirth: Knuckles had been transformed into him thanks to the machinations of Dr. Finitevus. (StH: #181, #182, #183, #184)

After Knuckles was returned to normal, thanks to Locke's sacrifice, he blamed himself for the destruction Enerjak caused, wanting to guard the Master Emarald によって himself alone. However as the Chaotix were building a brige to the dislocated Shrine Isle of the Master Emerald, Knuckles returned to them, due to some persuasion from Rouge the Bat. (StH: #186)

Following this, the Chaotix launched a direct assault on the remains of New Mobotropolis to attack the Dark Egg Legion and destroy one of Dr. Eggman's communications relays. However, the Chaotix ran into trouble completing their mission after Sonic was recalled to Freedom HQ, and Dimitri arrived on the scene to support the Dark Egg Legion. (StH: #189, #190)

The Chaotix later played a vital role in the final push against Dr. Eggman. While the Freedom Fighters distracted the Dark Egg Legion, the Chaotix flanked them, catching them off guard and forcing them to retreat. Later, they helped Sonic to get on 上, ページのトップへ of the Egg Phoenix, and while he distracted Eggman, planted Tails' Neutralizing Mines onto it, causing the vessel's destruction. Afterwords, they and the Freedom Fighters stormed the Eggdome confronting the Dark Egg Legion once more. After the D.E.L. retreated, they found themselves divided from Sonic who went to confront Eggman himself and they were left to tear down a barricade along with the others. (StH: #198, #199)

After Mighty and Bunnie Rabbot finished taking down the barricade, all the Freedom Fighters entered to see a defeated and broken Eggman. They then went back to New Mobotropolis to celebrate their victory. (StH: #200)

Losing A Member-
While heading to the Coliseum to investigate the chaos there, Espio came across Lightning Lynx, who explained that he quit the Destructix and that the Bride of Four Houses now ruled over the Iron Dominion. While Espio initially dismissed this all as lies, Lightning gave Espio a note with new orders from the Bride of Constant Vigil. He realized that he had to leave his フレンズ and return to his clan, along with Lightning. They then chased after Sonic and Monkey Khan to New Megaopolis, where Espio would return to his mysterious Clan work. Encountering the chameleon among the Iron Queen's forces, Sonic and Monkey Khan informed Knuckles of this turn of events. Knuckles was confused and distressed によって this turn of events, and eventually was confronted によって Espio in front of the Master Emerald. Knuckles comes to realize that Espio's betrayal was not willfull but rather a matter of being honour-bound to his clan; he hopes to find a way to free Espio from his duties. Some of the Chaotix were also called upon to battle Monkey Khan after he fell under the control of the Iron Queen. (StH: #201, #202, #204).

Trouble Over Downunda-
The Chaotix afterwards returned to エンジェル Island, with Vector and 線, レイ taking over watch of the Master エメラルド whilst Knuckles, Mighty, and Julie-Su met with the Dingoes before setting out after Dr. Finitevus. Both groups soon found themselves in trouble, the エメラルド guards attacked によって Wing Dingoes and the searchers caught in a booby trap. They escaped and found Finitevus on the surface in Downunda, only for エンジェル Island to become caught in chains as they attacked him. The mad doctor then told the ヒーローズ that if they wanted to save エンジェル Island, they would have to work with him. Ray, in the meantime, managed to scare off all the Wing dingoes によって faking a Super transformation via the Master Emerald, only for the island to start tipping due to chains anchored into it's side from cannons surrounding Downunda's Great Crater. The two then traveled to Downunda and joined Knuckles' group and Finitevus in battling a force of Wing Dingoes, and were then joined によって the Downunda Freedom Fighters. After splitting up, the two groups-with the exception of Julie-Su and Ray, who were sent back to エンジェル Island to guard the Master Emerald-were captured によって Finitevus and his allies in the Downunda Dark Egg Legion. After escaping with help from Freedom Fighter/Grandmaster アヒル, 鴨 "Bill" Platypus, the group defeated the Legion and expelled Finitevus from エンジェル Island before freeing it to resume its orbit. (SU: #9, #10, #11, #12)

Comings & Goings-
Later, members of the Chaotix would help to evacuate civilians from New Mobotropolis to エンジェル Island after the Iron クイーン seized control of NICOLE. They would later レポート success in relocating the evacuees, who remained under their care until the Iron Dominion was defeated. Afterwards, Espio was welcomed back into their midst, revealing that the Bride of Constant Vigil had sent him to エンジェル Island to watch Knuckles, and in that time he had learned things about all the Chaotix. His news soon sent Mighty and 線, レイ on their own adventure, seeking the Armadillo's long ロスト sister. (StH: #208, #210, #212) 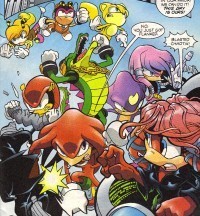 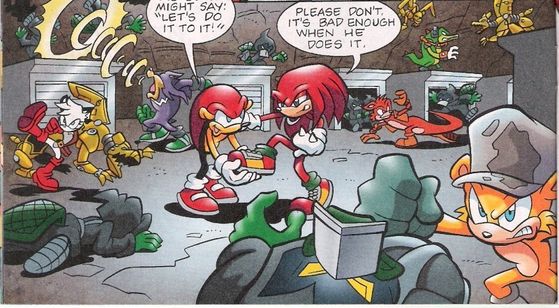 The Chaotix and Downunda Freedom Fighters fighting the Platypus Legion 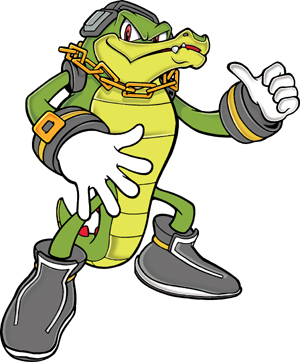 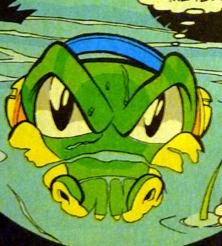 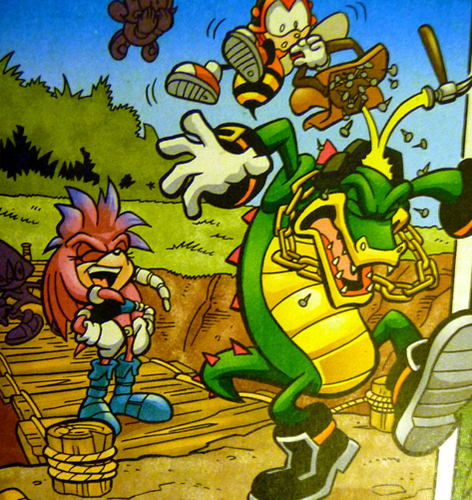 1
It's Hammertime
added by musiclover2015 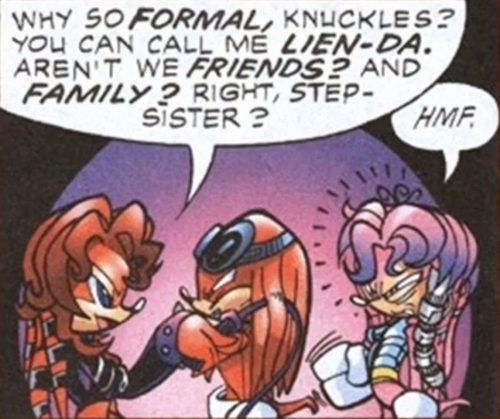 Knuckles getting flirted with
added by musiclover2015

Fighting over Knuckles
added by musiclover2015 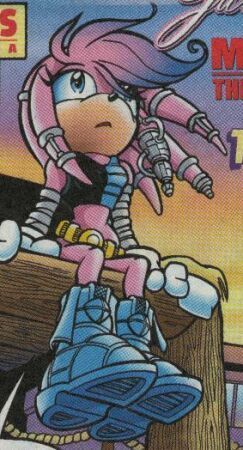 Julie-Su in the Chaotix
added by musiclover2015 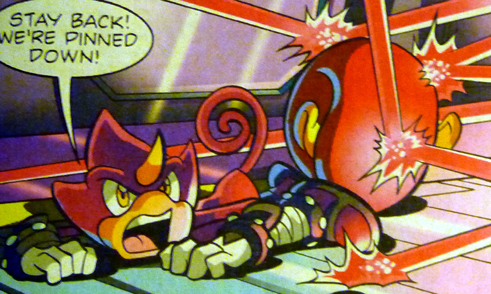 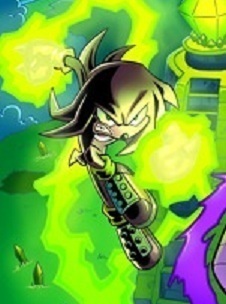 Rouge the bat
added by musiclover2015 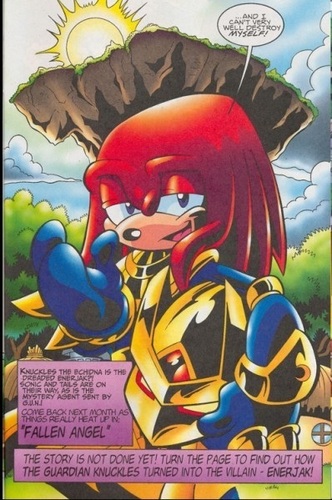 Knuckles as Enerjak
added by musiclover2015 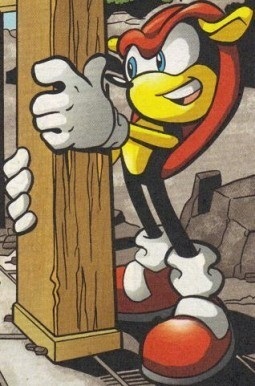 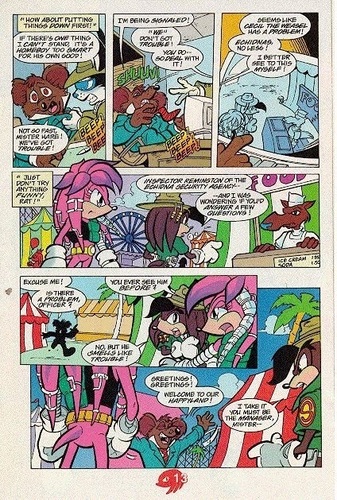 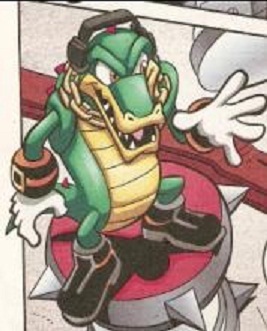 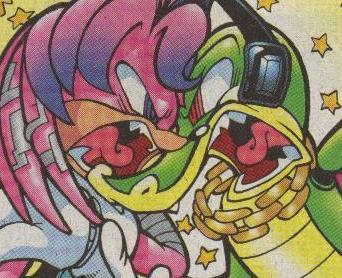 Julie-Su Vs. Vector
added by musiclover2015 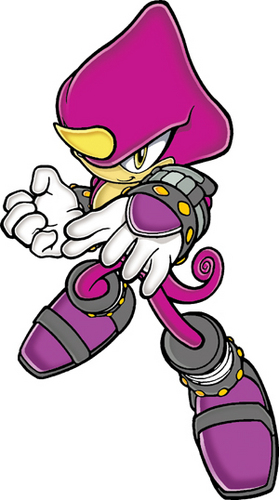