Light lay 次 to L, occasionally glacing at the handcuffs, ever since the night where light yelled out 'RYUK' during sex, L（デスノート） had ignored him completely. "L-" Light started only to see a cold shoulder "what is it Light?" It was obvious in L's voice that he was irretated. "I-I have to take a shower, あなた see I-" "Light-" L（デスノート） rolled over and to Light surprize wrapped his arm around him "I- I don't know if I can trust you" Light relized how even though L（デスノート） had been 芝居 heartless he felt as much pain as he did

"L" Light 発言しました tenderly as he stroked his head "heheh" Light heard ryuk chuckle from the corner. and before Light could shoo him away L（デスノート） had grasped lights back and lifted him slowly. Light felt himself prepare for L's hand または キッス ever so soft kiss... "Let's go" L（デスノート） 発言しました still keeping a stern and sorrow face "you 発言しました あなた had to take a shower" Light felt his head go light (no pun intended) "o-okay" a flustered uke 発言しました as his seme walked coldly to the bathroom.

to Light's surprize L（デスノート） looked away when he got undressed, and to his pleasure ryuk hadn't followed them. Light looked at L- did he not relized how cute he was when he sat like a child and sucked on his thumb. while pondering this fact Light looked down to be greeted によって his own size, he had a hard on. embarassed he jumped into the シャワー without relizing with his rush he had pulled in ryuzaki.

Light looked down then turn on the シャワー "I can't let L（デスノート） see me like this... he's just so-"
"yes Light?"
his calm voice startled Light causing him to fall back, leaving his harden limb in plain view. "Oh" L（デスノート） 発言しました blushing and turning away. Light in a clumsy attemped to cover himself yanked the chain and within 秒 L（デスノート） found himself ontop of his forbidden lover "s-sorr-" L（デスノート） gave in. Light apologizing so innocently drove him insane. L（デスノート） uncontiously was forcing Light's mouth open, Light slowly succome to L's strength and Lay down.

"ryu-ryuzaki" Light's voice weaken and for some reason his beaten down voice turned on L. "my turn" L（デスノート） 発言しました as he unbutton his pants "no L!" Light said- his voice still frail "I can't stay away from you" L（デスノート） whispered into Light's ear. Light's eyes buldged his ハート, 心 jumped out of his chest "r-ryuzaki I au-" Light bit his lip trying not to cry out "go ahead" L（デスノート） 発言しました smiling

L（デスノート） turned off the water- "you don't need that when I'm here", "ryuzaki" Light 発言しました sitting up "do あなた still hear rain?" "yeah I guess I do" "It's been raining for a whi-" Light was stopped in extasy as L（デスノート） proceeded to toy with him, Light still clamped onto his lip, keeping him from relesing his build-up, "Oh L" Light moaned as thunder rumbled in the back round "LIGHT-KUUUUNNNNNN" A voice emerged from all the noise "oh shit" L（デスノート） 発言しました his voice changing from fluent and calm to worried "MY FLIGHT WAS CANCELLED!!" "what is she doing here?" Light 発言しました in clear dissapointment. L（デスノート） dissapointedly looked down at his boner "well I don't know what to do about this" "you've never masturbated?" Light knew it would have been aqward with everyone except L, he was so cutely unaware.

"this has never happened until I met you" L（デスノート） 発言しました looking up with innocence in his eyes still so naive Light was flushed. "here" Light 発言しました coming from behind him. "I'll 表示する you" those words sent shivers down L's back and Light placed his wet hand onto to L（デスノート） "L-Light" L（デスノート） 発言しました he's face scrunged up and his head whipped back onto Light's shoulder as Light kissed him in between breaths L（デスノート） moaned the incomprehentiable pleasure was over whelming. "L-Li-" L（デスノート） mumered almost colapsing in delight of his partners hand. "I'll 表示する あなた もっと見る L" Light sunk lower, he owed L（デスノート） at least this much pleasure. feeling his body as much as possible.

"awe wheres Light!" Misa pouted walking around. the thunder had shadowed Light's cries of enjoyment. "where is he?" she pondered

(back to the shower)

"LighT!" L（デスノート） 発言しました as he was thrusted into the corner, "is it enough" "y-yes" L（デスノート） 発言しました his voice was fading, あなた could tell it wasn't sincere "I don't believe you" Light felt good controlling L's movement "augh, Augh AAUGH" the pleasure built up L（デスノート） threw his head back in ecstasy and his elated cries echoed through the house.

"AUGH!" 'again?' Misa thought, it hadn't once crossed her mind that her boyfriend had been thrusted/thrusting into によって another man for close to an hour

"a-again" L（デスノート） 発言しました clutching Light tightly "and again" L（デスノート） was so thrilled によって this pleasure he forgot every suspicion of Light being Kira (not that it was Light's intention) but it was the first time L（デスノート） had thought of anything else and then 'SLAM' through the close to being transparent door misa's figure appeared, she struggled to see them through the blurry glass and fog (mostly steam ;) Light drew out and L（デスノート） gave out one last cry of beautiful ecstasy "Mi-Misa" Light jumbled out "I- I thought あなた went on vacation he hastily grabbed a towel and stepped out face to face with her. "go meet me in the bedroom" Light 発言しました "but were allllll allononnne LLiigghhhtttt-kkkuuuunnnn" Misa annoyingly prolonged her words "no-" Light 発言しました signalling to the handcuffs "oh DAMN IT L" Light whipped his cold stare at her and she whined back to the bedroom.

Light appeared back in the door of the shower- dropping his towel he 発言しました "shall we continue?" "L-Light, but- but misa" "screw her" He 発言しました as he tugged on the chain and pulled L（デスノート） onto him "OI! LIGHT!!"... 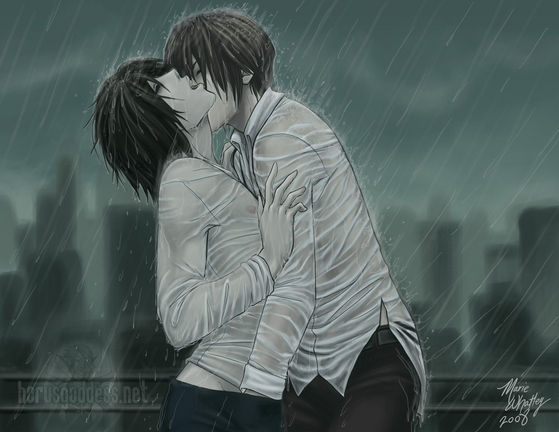 JJ-kittyCat, SenpaiSalad and 5 others like this
K5-HOWL gosh u love this story ><
mcluvin thanks you :)
mcluvin I just relized in the bottom picture Light has profound hips
I-Luv-L OMG one of the best things I ever read!
TeamPeeta649 This is amazing!
tori356 Its a good story, but would be a little easier to read with grammar fixes.
ScarlettWitch OMG I'm blushing soo much right now! Onto the next one!! O///////////////O
blooddupre ~Nezumi~ So Adorable
DeathNote_Emo So sexy... I added cake for L too..
DeathNote_Emo #GreatForNightTime