There have been numerous threads addressing different playing styles. But they’ve pitted one style against another ... または deeply analyzed a particular style. Here, we’re going to define all the different styles of play in one location. (At least that’s my goal.)

1 - Define and categorize the styles of play.
2 - Identify some Pros who exemplify the styles in question.
3 - Be prepared to defend your opinion with some logic.

Let’s see if we can arrive at some level of agreement ... and keep the flaming to a minimum.

I’ve put a lot of thought into this. Here’s my best shot at this -- garnered from over thirty years of playing, teaching and coaching tennis. Tell me what あなた think.

I describe the styles of play with Major Categories ... and Subcategories. Some of these groupings may surprise you, but please read through it before あなた fight me. Of course, I’m open to different 閲覧数 ... so long as あなた can support them.

I am removing the examples of Pro Players from my descriptions. I agree with those who have suggested this creates confusion, rather than clarity. (Look at Roddick: When I made this guide he played quite differently than he has the last two years. He's just one example of a Pro NOT being a "pure" example of a style anymore....)

My Major Categories of Playing Style are:

1 - Attack the Net should be pretty self-explanatory. This player constantly presses, probes and exploits the slightest weaknesses they uncover. They push フォワード, 前進, 楽しみにして and try to finish the large majority of their points with winning volleys. They relentlessly pressure あなた to try and come up with your best passing shots または lobs. They put あなた on “constant defense.”

What I expect might ruffle some feathers is how I consider S&V to be a subcategory of Attack the Net. The もっと見る I thought about it, the もっと見る I like this manner of codifying the styles. (I’ve observed many players who S&V ... on “offense”. But when Receiving, they are baseliners. Maybe they lack confidence in their Returns, so the attacker becomes a もっと見る patient Baseliner....)

2 - Baseline is the most prevalent broad category of choice for the last 15 years. Almost all the 女子テニス協会 players are in this category -- as are most of the ATP’s clay courters and even several ATP pros preferring hard courts. These players stalk the baseline and rarely *choose* to come to net.

2 a. - Blasters, as Baseliners, may have a big serve and a big forehand ... または just a reliable serve with big ground strokes. Blasters pound the ball into the corners ... down the line ... inside out. They jerk あなた from one side to the other putting あなた in the position of constantly being on the defensive. Any ball is fair game for them to “go for broke.” Most points against Blasters are over in less than ten shots; usually from the Blaster’s winner ... または unforced error.

2 b. - Machine Baseliners are the steadiest opponents you’ll ever meet. They may not have any single stroke which is their “big weapon,” but they relentlessly hit with pace ... running あなた from one side to the other ... sometimes even prolonging the points to wear あなた down in the end. They don’t seem to miss. They don’t seem to tire. They demoralize あなた with their stamina.

2 c. - Soft-Baller Baseliners are tireless players with excellent footwork and anticipation. They always seem to be where they need to be to cut down your angles of attack. あなた cannot get them to engage あなた in a power exchange. They seem to absorb all the power of your shots and redirect it with good deep placement, but they won’t give あなた any pace to work with. あなた must always supply your own power. This player exhausts あなた ... physically and mentally.

2 d. - Retriever Baseliners are quick and tireless. He believes he can get any ball back and becomes a “human backboard.” They rely on your misses, rather than any one “money shot” of their own. Their strength is that while retrieving, they keep あなた pinned to your own baseline. They have good depth and uniformly good pace on their strokes. They just don’t seem to work the corners または angles the way most baseliners do. If あなた are playing the baseline game yourself, あなた are in for a long 日 against the Retriever.

This style rarely exists beyond the club level. In my area, most of the 上, ページのトップへ HS Girls -- and many JV Boys -- play this “war of attrition” style.

3 - Counter Punching players are always looking for the opportunity to *instantly* switch from 安全, 安全です defensive テニス ... to ripping winners. They can “change gears” with a single shot. Their passing shots are “thread the needle” accurate against those playing Attack the Net. Their drop-shots and lobs are deadly. Counter Punchers can detect and exploit the baseliners’ inadvertent openings ... and end the point with one “high risk” down-the-line winner ... または fool あなた with a short-angle インサイド・ヘッド（Inside Out） forehand winner.

Opponents playing both Attack the Net and Baseline テニス are fooled into thinking “He can’t keep that up the whole match.” When do these opponents realize their error? Unfortunately, when -- befuddled -- they are shaking hands at the net and congratulating the Counter Puncher on a 6-3, 6-3 victory.

4 - ジャンク Ball players can drive the “purists” among us into the Nut House. These players never allow あなた to get into a rhythm. They vary the height, depth, angles and quantity of spin so much your “strokes” fall apart ... right after your brain explodes. ジャンク Ballers seem never to be out of breath and play high-percentage テニス when it comes to “court position.” When あなた do manage to get them on the run, あなた learn they are also very quick on their feet.

4 a. - Spin Doctor players are the highest developed of the ジャンク Ballers. They stroke the ball with pace (when they wish) but also with crazy slices, side spins, topspins and some spins we don’t yet have names for. Spin Doctors keep あなた off-balance, wrong footed and clumsily compensating for their shots によって altering your own strokes. They are serious threats to both players who Attack the Net and Baseliners.

Most players would rather have a root canal than play these guys. Their テニス seems as much “psychological warfare” as it is “real tennis” competition. While Spin Doctors’ opponents frequently “lose their cool” during matches, the Doctors themselves tend to be some of the most unflappable players あなた will encounter.

4 b. - Chop Shot-er ジャンク Ballers are found all over the Recreational and Club levels of tennis. These players have mastered the Chop Slice shot so well, they rarely bother hitting a flat または topspin shot. Chop Shot-ers can put their chopped slice deep, short, angled and lobbed. They are very good at “working the wind” with their chops and can run the 4.0 and below opponent into the ground with their accurate shooting.

Chop Shot-ers play very good “position” and rarely have to run for your silly attempts to blast them off the court. When あなた do succeed in running them, あなた sadly discover they are some of the quickest players afoot. They 愛 it when あなた try to overpower them ... because they are masters at redirecting your power with their junk.

(A friend near the bottom of our ladder is 74 ... and proudly informs the 20- and 30-somethings on the ladder (after badly beating them) that the rest of us call him “Mr. Chop Shot.”)

5 - All Court players are able to adapt their games to give them the best advantage ... against any opponent’s style ... in any weather condition ... however and whenever needed. They can Soft-Ball the Baseline Blaster. They can Attack the Net against the ジャンク Baller. They find what works best against the Counter Puncher that 日 and dismantle *that* game. The All Courter can blow some Baseline Machines off the court with an Attack the Net style. They can exhaust the Serve & Volleyer with Counter Punching.

At the highest levels, the All Courter may choose to play directly into his opponent’s strength. (Bill Tilden was notorious for this tactic. When asked why he attacked the other guys’ strengths, his answer was, “That way, once I’ve broken him down, all he has to fall back on ... are his weaknesses.”)

All Courters tend to be able to change strategies and tactics “on a dime.” They may, within a set -- even within a point -- switch from one pattern to another. They can keep あなた off-balance ... and unhappy.

6 - Pusher テニス players win によって relying nearly exclusively on their opponent's unforced errors. They block, bunt または poke the ball with the goal of “just getting it back.” Pushers aim for just beyond the T in their opponent’s back court. This target gives them the largest margin for error.

They give あなた no power, no pace, no depth または placement. They just "get it back.” The strokes of the Pusher are never full and flowing. They have little ability to employ topspin. Any “passing shots” the Pusher hits are hardly intentional. (But they never act surprised when a shot of theirs becomes unreturnable.)

Pushers have unshakable psyches. Mind games and insults about their lack of “real” テニス ability have no effect on them. (They tell anyone in the Club about the times they beat the local High School “hero” in straight sets.) Pushers are completely aware that テニス competitors are not scored on “style”. They care only about the “W / L（デスノート） column.” Pushers are content with the fact that they will never be at the 上, ページのトップへ of the 4.0 ladder; they know most Club payers don’t advance beyond 3.5 ... and since they are in the upper third of the 3.5 ladder, they are content.

Pushers are some of the friendliest and most outgoing members of the Club. They are always willing to help fill-in to complete your doubles court (which usually elicits groans from the other two players on your court).

There are no pushers in the pro ranks. None. The Pusher tops out at the 4.0 level.

6 a. - Soft-Ballers, as Pushers, have excellent court sense. They never seem to be out of position. Your efforts at blasting winners come floating back to land just beyond your service line. This Soft-Baller may be athletic from success in another sport, such as basketball, football または baseball. They may not have pretty strokes, but they know where to position themselves to give あなた the least likely angles of success. When あなた are begrudgingly shaking hands with them after they’ve embarrassed あなた again, あなた usually notice they are hardly even sweating ... which only “adds insult to injury.”

6 b. - Retrievers, as Pushers, 移動する around the court like water bugs, getting to your best “winners” and floating them back again. Their foot speed is remarkable and they seem never to tire. Your frustration at not being able to hit winners against the Pusher Retriever only seems to refill their tank” for more.

They even have the temerity to smile throughout this match which is ripping your guts out. あなた try hitting even bigger winners -- または “wiping that smile off their face” with your display of power -- and they *love* this in you. They delight in watching your mind disintegrate as your very best shots just keep on coming back.

Back in the Clubhouse, they really “twist the knife” によって offering to buy the ビール with that SAME SICKENINGLY PLEASANT SMILE ON THEIR ROTTEN FACE!!! The Pusher Retriever makes あなた seriously think about taking up some other sport from which あなた will gain もっと見る fulfillment. Something like ... catching javelins for the Track Club. Sheesh!!!

But as stated in my OP -- reasonable minds can differ. I'm not insisting everyone conform to my classifications.

I am NOT the 作者 of this Article. 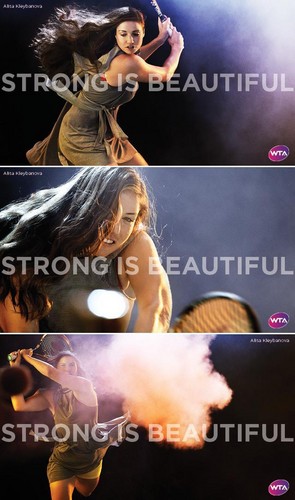 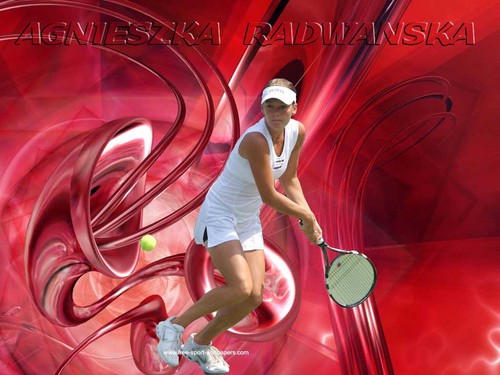 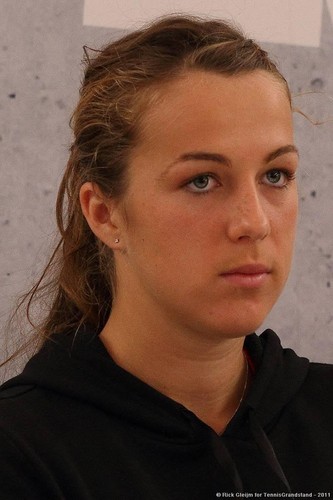 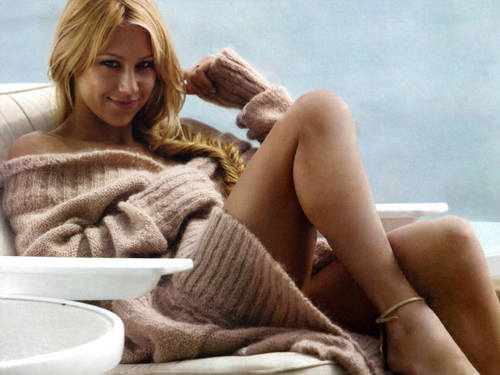 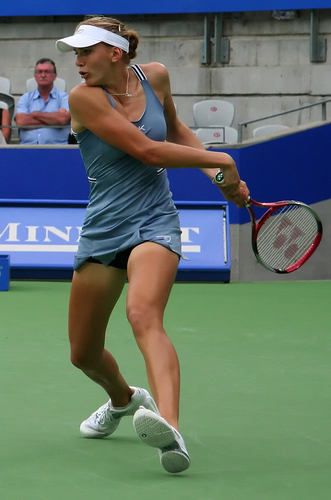 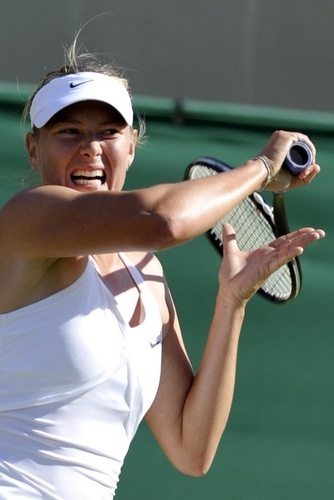 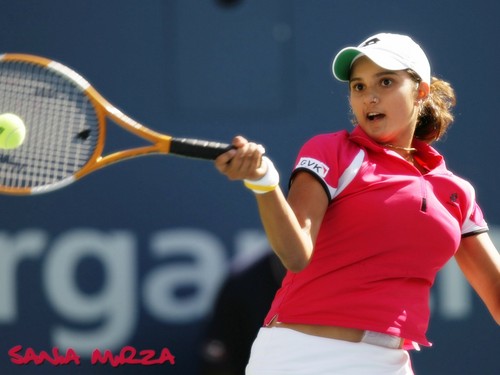 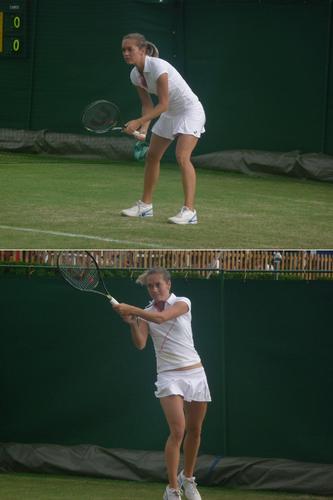 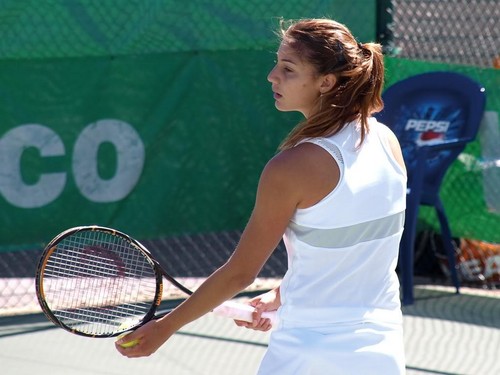 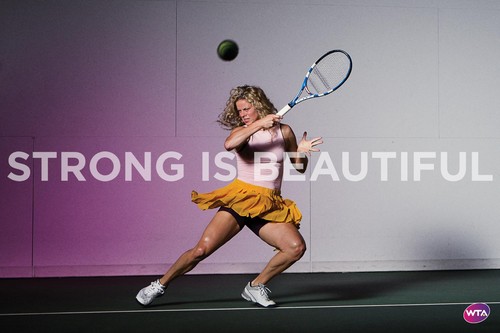 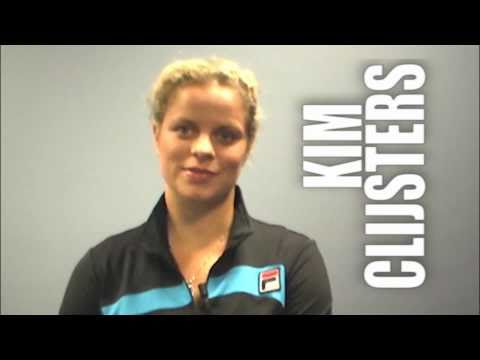 Mandy Minella in Running For The Backhand
added by New1Superion2
Source: http://www.google.com/ 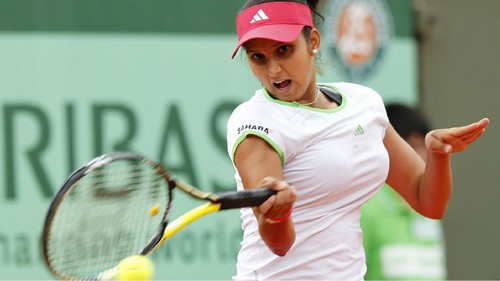 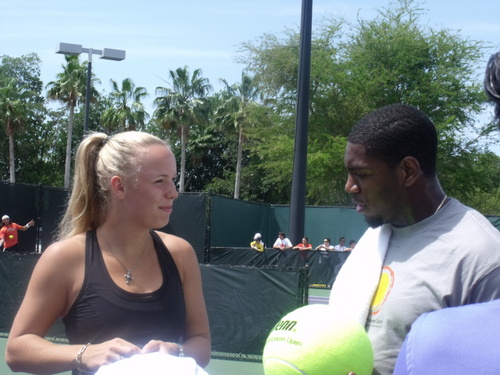 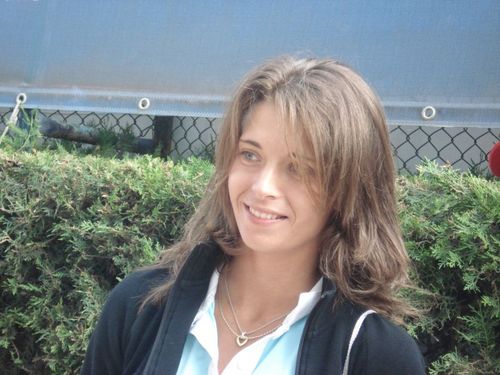 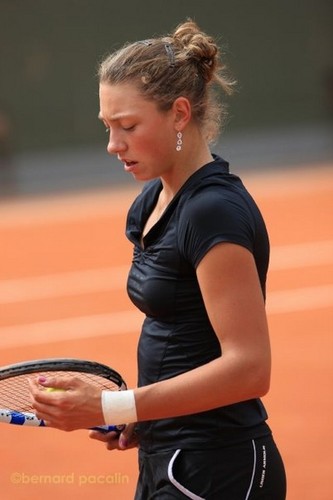