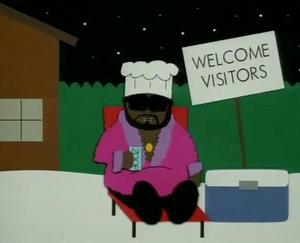 Chef from South Park looking forward to meeting the visitors.
When most people think of "alien abductions", they think of being sucked up into a UFO through a beam of light and being experiemented on によって strange, gray humanoids with big, black eyes. If あなた say that you're an "abuction victim", people often brush it off, laugh, または think you're crazy.

But what if it happens to you?

Many people in America and throughout the world share similar stories of being taken in the night and brought on ships. They are tested physically, mentally, and emotionally. The grays almost always communicate with them telepathically. There is a consistent feeling of being secure...
continue reading...
2
Mystery オレンジ objects seen flying over Swansea and Neath, uk! Ufo's または not? Xxx
posted by lucyloo
MYSTERY OBJECTS SET PULSES RACING! Something strange has been seen flying over Swansea and Neath, in the uk. Several people have 発言しました to have seen glowing オレンジ balls hovering and then disappering at speed! It was discribed to look like an オレンジ sphere, pulsating bright and dark, it was about 100ft up in the air, just hovering there in one place and the 次 thing it zoomed straight up in to the air and then another one came out of no where and stopped in the same place as the first one and zoomed up!
1
ヴァンパイア v Aliens: Fight to the Finish (Chapters 1-7 of 60)
posted by kkeithh
Chapter One

In the first decades of the 21st century, it would hardly come as a surprise to learn that we are not alone in this vast universe. It is generally accepted that microorganisms populate the cosmos, however the existence of intelligent life beyond our pale, blue dot engenders a もっと見る robust ディベート among scientists, scholars, religious authorities, and the public. Many people are of the opinion that if ET existed we should have heard from him によって now. The deafening silence screaming out from the void is proof that we are alone in our superior intelligence, as defined...
continue reading...
5
Are we ready for aliens?
posted by avatar2012
Recently i have been devulging into the studies of 宇宙 science and the possibility that aliens could come to our earth. Throughout my studies i have found many things saying aliens have come in the past to earth, aliens are comin to earth, または aliens are already here and the government is just keeping them from us. And throughout this whole time a 質問 has poked at me:

If aliens were to come to Earth, would we really be ready for it?

I have thought long and hard about this and I am here today to share my opinion on this matter.

First reason why were not ready:
Violence. Violence is a part...
continue reading...
Josh's Rant On Why UFO's Are A Load
posted by itssanta
UFO's are a load. Everybody knows it's the Canadians. People keep making deals out of this, it's not anything but a couple of people on weed who saw stuff while they were high. Besides, we have people like Chuck Norris for this. And if we were serious we could just start launching nukes into 宇宙 as a warning, and since we're not doing that, and Peter Jackson is instead making a movie about it, we should ignore all this. It's a load.
If they take someone like Gaahl または Corpsegrinder, then I'll consider believing, but until that 日 never comes, I'll stand here with a plate of パンケーキ waiting for the load of syrup that is UFO's.