Mattie's POV (she is not counting the days)

The マーメイド 発言しました that Hook had captured Tiger Lily, John, and Michael and was taking them to Skull Cave.
It was no telling where Peter and Wendy where at so I would go alone. I went back ホーム and grabbed a sword. I looked around for the boys but didn't see any of them. I figured I should leave a note but than again Peter had Wendy, he didn't need me any more.
I set off to Skull Cave, it's not very hard to find....
continue reading...
2
Flight 29 Down Chapter 12
posted by Sk8bordNewMoon
Flight 29 Down Chapter 12
I was scared to look back. I didn't want to if he fell. I warned him.
I saw Jackson and Lex set their 火災, 火 wood down and come towards me. I turned around and look at Narhan who was laying on the ground unconious.
What happen? Lex and Jackson asked at the same time.
He climbed a 木, ツリー and was almost to the 上, ページのトップへ when he fell. I 発言しました annoy that Nathan didn't listen to me.
Nathan? Jackson asked worried.
You two take care of him. I will get the coconuts. I said.
We can't risk it. あなた might get hurt like Nathan. Lex said.
I can climb. Trust me. I said.
I started climbing and got...
continue reading... 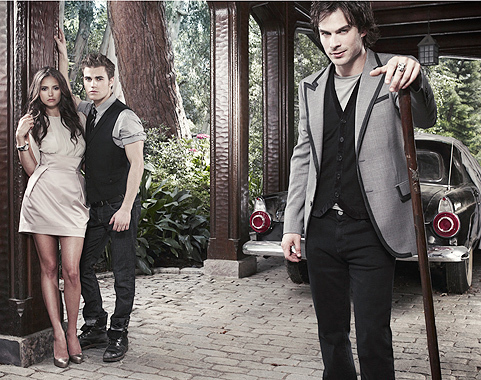 Elena Gilber, Stephan Slavatore, and Damon Salvatore
added by Sk8bordNewMoon
Source: CW Google
3
ロスト And Found CHapter Thirty Three
posted by Sk8bordNewMoon
ロスト And Found Chapter Thirty Three
I got out of class and went to the bathroom.
Look who it is. A girl said.
They started whispering.
Are あなた going to hang yourself? Someone asked.
Uh no, I was going to wash my hands. I said.
Are あなた sure あなた wouldn't rather hang yourself? She asked.
Would あなた shut the heck up? I asked.
I don't think I can do that. She said.
Well あなた better learn, quickly. I growled.
Ohh, I'm so scared! What are あなた going to do, cut yourself, エモ baby? She asked.
I walked straight out of the bathroom and to my locker. What is her problem? Why was she being so mean? I open my locker and...
continue reading...
5
In The End It Should Be Okay Chapter 25
posted by Sk8bordNewMoon
In The End It Should Be Okay Chapter 25
Y'all, if あなた read this story または any of my other ones, please PLEASE rate and please comment! Your コメント are what keep me writing!!! So please let me know あなた are reading! Thanks

Lilly's POV
We arrived back at the ホーム and there was a ton of papparazi in our front lawn. Thier flashes went off and they blinded me as I was trying to get through the front door.
I don't understand how they even knew that I had been hanging out with Christopher. The guy that broke my ハート, 心 into a tiny thousand pieces! Why did he have to dump me? It's just not fair.
Alex wrapped...
continue reading...
2
Flight 29 Down Chapter 39 The Final Chapter...
posted by Sk8bordNewMoon
Flight 29 Down Chapter 39 The Finial Chapter...
I couldn't believe it! We were getting resued! This is what we had been waiting for!! I was happyto be going ホーム and so was everyone else.
We watched the ボート with a couple of people on it get closer and closer to coming ashore. We were all very excited about getting rescued. We aren't the same people who arrve on this island, we have all changed.
Ian needed to see this moment. I ran to the tent, I told him to put all his weight on me so he could come outside and see what was happening.
Cassidy you're really nice. Everything that Eric has told...
continue reading...
1
Flight 29 Down Chapter 38
posted by Sk8bordNewMoon
Cassidy's POV
"Lex!"
Cassie! He screamed.
He ran and hugged me tightly.
I missed you. He said.
I missed あなた too. I said.
I watched Jackson and Captain Bob take Ian to a tent so he could lay down in a cool place.
Lex, can あなた give me some pain killers? I asked.
Yeah, why? He asked.
Ian fell and broke his leg, he's in amlot of pain. I said.
"Oh okay"
I followed him into the plane and watched him dig through the bag. He pulled out a オレンジ contaner with white pills in there.
Give him two and only two. Lex said.
I know. I said.
Just making sure. Lex grinned.
I grabbed some water and went to the tent. I gave him...
continue reading...
2
Flight 29 Down Chapter 36
posted by Sk8bordNewMoon
OKay so this is the thirs chapter withing 2 または 3 days. I am stuckish on my other chapters and this one is going really good right now. lol Hope yall enjoy! :D
P.S This chater was so much FUN to write!!! Thanks yall!

I was starting to feel where I was at. I could feel my hands, they were still tied. I was laying on something cold. My vision was blurry, I blinked a couple of times and it got clear.
Cassidy, are あなた okay? Jackson asked.
Yeah I think so. I said.
I felt Jackson's hand brush over my skin. He was trying to loosen the knots.
I can't get them undone. Jackson said.
Do あなた have a knife? I asked....
continue reading...
2
Flight 29 Down Chapter 31
posted by Sk8bordNewMoon
I never pictured death to come this way. I was losing, no I had lost. I struggled to get out of this blackness. I need to go back, for Jackson. I need to win this fight against myself. I should have done what Jackson told me too. This is all my fault, no it's Abby's fault. She was the one who was getting the guys to fall in 愛 with her. Stephan dumped me for her. Atleast JAckson isn't falling for her または not yet.
I ran and ran through the darkness. Tripping over my own feet.