1
Honeymoon Mayhem- Part 6
posted by skipperfan5431
A FEW DAYS LATER!!!!!!
Lilly and Skipper have been locked inside the holding chamber for atleast six days. It was taking Blowhole a while to build his death trap thingy....yeahh.. "Okay あなた two. GET UP!" Hans ordered, poking Skipper and Lilly with one of the large sticks. He then herded them into the 次 room, which was where they were going to meet their demise.
--------------------------------------------------
TORTURE ROOM!!!!!!!!
"Welcome pen-gu-ins. Ready to meet your ends?" Blowhole asked, holding open the door to a big metal cage, wich was partly submerged in water. "Then, Hans threw Skipper and Lilly into the cage. Lilly looked down, noticing the water on the floor. "Uh, Skipper...I think hes going to.." Suddenly, an electric shoc surged throught the cage, shocking the two unsuspecting penguins. "Holy 枕 pets! What was that!?" Skipper asked, jumping up and down, due to his now even もっと見る messed up feet. Lilly looked at him feeling horrible. "The cage is electrified Skipper. This is how they're gonna finish us off." Skipper looked at Lilly and frowned. "You messed up Lilly. BIG TIME!" He 発言しました sternly. "Look Skipper. I know that I should never have 与えられた in to Blowhole's trick, and I feel terrible for it, but for now we need to cut this ブル crap and find a way out of here!" Lilly said, the determination 表示中 in her voice. Skipper was suprised at her attitude.....but he liked it. "Okay Lilly. What's the plan?" Skipper said, a slight smile spreading across his face. Lilly gave him a weird looking frown. " Weellll.....I do have ONE plan, but I highly doubt you'll like it." Skipper's eyes widened. "Well. What did あなた have in mind?" Lilly leaned twoards Skipper and whispered the plan in his ear.
--------------------------------------------------
THE PLAN IN ACTION!!!!!!!!!!!
Clone was doing patrol over the cage while Skipper was asleep. He looked through the bars to see Lilly standing there, a flirtatious look on her face. "Hey there you....come over here for a sec...I gotta tell あなた something." Lilly said, doing the 'come here' motion with her flipper. Clone waddled over to the cage with a charming smile on your face. "So. I see あなた FINALLY came to your senses, huh dollface. Lilly's face cringed in discust, but she shook it off and waddled slowly to the bars, swaying her hips from side to side. "Ofcourse I did. I mean, Skipper is 'alright' but YOU. Your a REAL bad boy.." Lilly 発言しました seductively, winking at the gawking clone. Clone then Pressed himself up against the bars, as did Lilly. "Ya know....if あなた let me out of here, あなた can 表示する me how much of a bad boy あなた REALLY are." Clone went to grab the keys, but then he turned around. "Im sorry blue eyes. But Blowhole ordered me to--" Lilly then gathered all of her courage and kissed Clone right through the bars. (Lilly's thoughts: EWW EWW EEEEWWWW!!! If we survive. Skipper owes me SOOOO much!!!!!!!!) Lilly then pulled away from Clone. "Come on out beautiful!" He yelled, putting the keys in the lock and swinging the cage. As soon as the door opened, Lilly kicked Clone in the 'berries' and pinned him to the floor, bending his flipper behind his back. "Alright Clone! How do we get out of here!?" Lilly demanded. "Go out through that back door, then あなた have to jump out the window, because the floors are full of mines!" Clone sang like a canary............heh heh. Suddenly, Skipper sprang up from the floor and jumped out of the cage. One he got near Clone, he stepped on his back hard. "And THAT'S for キス my woman!" Skipper 発言しました triumphantly as Lilly pulled his flipper. "Come on darling. Were getting out of here!"

It was a normal morning at the HQ;Skipper drinking 魚 coffee,Rico looking at "Kaboom Weekly" Magazine,Kowalski working on his latest invention,Private watching "Lunicorn"and Jazzy was drawing.
It was also a normal afternoon;training,saving,yelling at Ringtail for blasting his boombox.It twas night when things became abnormal.Kowalski finished his invention,the Star-O-Tron 2000...
continue reading...
5
Switcheroo!- Part 4
posted by skipperfan5431
Lilly looked around at the mechanisms of the ポップコーン machine, but was unable to figure out how to turn it off. She had seen Kowalski do this kind of stuff hundreds of times, but it never really applied to her! "Help! The delicious salty treats are smothering me!" Julien cried from above. "Hang in there Julien!" Lilly shouted back, trying toget the situation under controll. "Okay,okay. What would Kowalski do?" Lilly muttered to herself as she randomly picked up wires. Then she saw two purple wires connected to two black ones. "Hey. Those wires are similar to the ones Kowalski needs..." Lilly's...
continue reading...
5
Love's Conspirator (page 1)
posted by LtKowalski
This story is for Miss Lilly, AKA Skipperfan 5431. May あなた be happy with him.

I went inside the I thought empty HQ, but only to find Lilly in Skipper's arms. My arrival struck them アナと雪の女王 staring at me with wide eyes. they may have seen the pain in my face because Lilly whispered "Kowalski,"
That voice! That angelic voice, the voice that will never hold 愛 for me. I stormed off to my lab and slammed the door shut. I headed to my table, maybe science will divert my thinking. I stared at my test tubes, but the...
continue reading...
2
You've NEVER done it?- Part 1
posted by skipperfan5431
It's a bright and sunny 日 at the Central Park Zoo. The penguins are on a mission to check out a weird noise coming from the reptile house. "Skippa, what if theres a ghost in the zoo!" Private whimpered from behind Skipper. "Don't worry Private. It's probably just one of the charmeleons moaning because he has an upset stomach." Lilly replied sweetly as she patted Private on the back. She had to keep him focused on the mission at hand. As the penguins approached the reptile house, the noise got louder. "Okay boys. We 移動する in fast and we 移動する in undetected! GOT IT?" Skipper commanded. His team...
continue reading...
Amusement park PANIC!- Part 8
posted by skipperfan5431
Kowalski ran into the room as soon as he heard Lilly's voice. " You're on the plane. Skipper saved your life outhere. A-few もっと見る 分 and those fumes would have killed you!" Lilly smiled. " Aww. How sweet." she 発言しました to Kowakski. " When X took me off the ride, what did あなた guys say?" Lilly asked suspiciously. " Uh nothing! Nothing at all." Kowalski replied in a nerveous way. " Really? Because I could hear あなた boys giggling like little school girls from outside the door." Lilly said. " Well...." Skipper walked in. "Here he is, MR.HERO!!!" yelled Kowalski as he pushed Skipper twoard's Lilly's...
continue reading...
Amusement park PANIC!- Part 6
posted by skipperfan5431
As soon as the 動物 aproach the ターミネーター ride, Officer X jumps out holding a giant vacume with a strange black liquid inside. As soon as Kowalski sees the strange substence, he seems to recognize it and he slides away. " Kowalski! where are あなた going!?" Screamed Private, hoping his friend would answer. " Do あなた little birdies know whats in this vacume?" Asks Officer X in an evil tone. He finds a ラット and sprays it with the strange black mist. It seems to be dead. " AHHHHH!!" Screamed all the remaining penguins. (and Julien.) " This is somethi'n Ilike to call CHEMICAL X!" Explains Officer...
continue reading...
Amusement park PANIC!-Part 4
posted by skipperfan5431
Everyone is sreaming and having an awsome time. Lilly grabs to Skippers Flipper without noticing and he begins to blush lightly. Kowalski is about to puke and Private is crying like a baby! What could possibly go wrong? Well, i'll tell you! The ride suddenly comes to a complete stop. " AHHH!!!!"Screams Lilly at the 上, ページのトップへ of her girly ペンギン lungs. She realizes that shes hugging Skipper's flipper sooo tight, it turned blue. " Excuse me sir...." Lilly says embaressed. They look up and see Officer X standing at the back of the ride. " Well, well,well. If it isn't my old flightless little nemiseis."...
continue reading...
Lilly! Don't go! - Part 2
posted by skipperfan5431
As soon as the クイーン looks around the habbitat for her daughter Lilly dives underwater. ( Why is she here! She wasn't supposed to know where I am! I told her I was in Monticarlo!) Lilly thought to herself. Then one of the beefy bodygaurds pulls Lilly out of the water, and places her in front of her mother. " PRINCESS LILLIAN! HOW DARE あなた LIE TO ME ABOUT YOUR WEARABOUTS?! I THOUGHT あなた WERE IN THE MONTICARLO TRAINING FACILITY FOR PRINCESSES!!!" " Heh heh. Lillian." Skipper jokes to the boys. " Mother. How did あなた find out where I am!?" " Who told you?! Kam, Roxy, Joaney!?" Lilly asked feeling...
continue reading...
2
Secret admirer- Part 5
posted by skipperfan5431
"Huh what do あなた mean?" Asked Maurice in shock. " The 愛 letter." Lilly replied with again, a seductive tone in her voice. Maurice couldn't stop staring into her big, beautiful, baby-blue eyes. Just as he began to walk twoard her, Skipper and Rico jumped in front of him and grabed Lilly. " Thanks Maurice." 発言しました Skipper greatfully. " I thought she left the zoo. Oh, and あなた didn't seee annything..." The penguins then jumped out of sight. "How did she know...... " Maurice 発言しました as he went back to his king. "LET ME OUT!!!" Lilly yelled as she banged on the cage with a newly installed security...
continue reading... 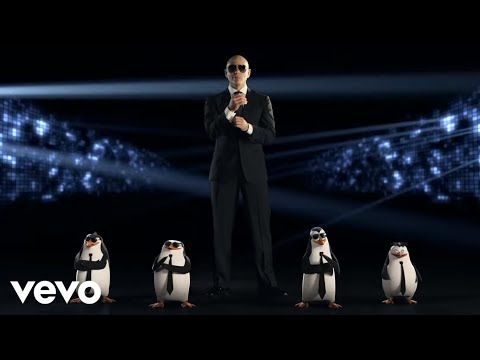 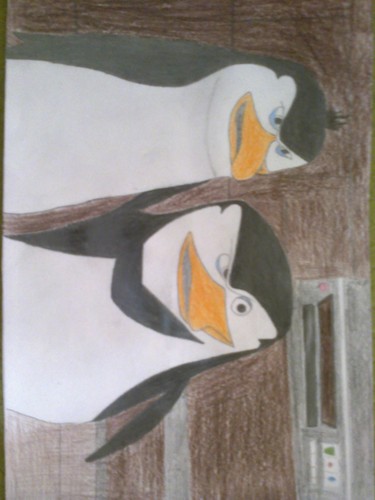 5
Keep an eye on him. I think he's finally cracked!
added by Candycupcake
Source: Me 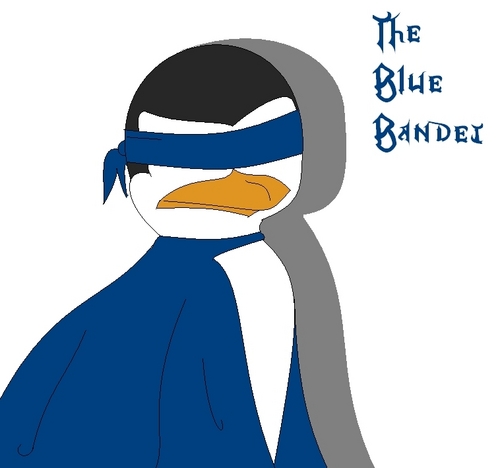 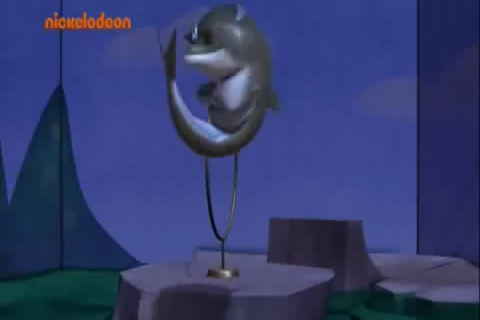 4
blowhole thinks he is flipie
added by jdog669 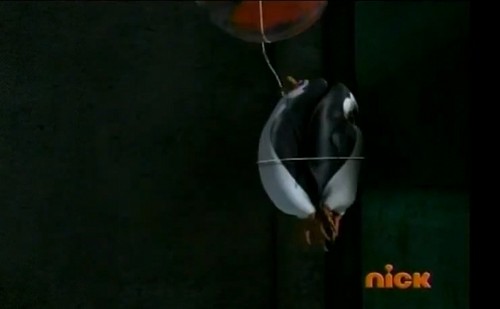 Skipper: Is the dummy ready?
Kowalski: I took advantage of the 食 I could find under the table, and the gum made an excellent bonding material to hold it together. (proudly shows Skipper two ペンギン dummies made out of gross タコス meat and other stuff, and disgusting pieces of chewed gum.)
Skipper: Outstanding! These will buy us a few precious moments.
The monster meat タコス is moving around across the floor, looking around for the two ペンギン runaways. It is nearing their table. They quickly dive back under the tablecloth before they could be seen. 次 Kowalski makes a working スリング shot using...
continue reading... 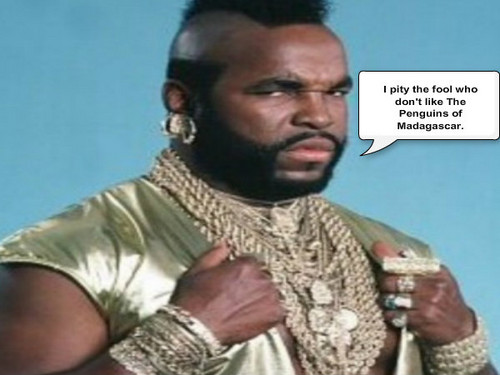