Larry: *Watching them, on their left*
Adrenaline: So, is that them?
Larry: Yeah. That's what the don said.
Adrenaline: So, what's the plan?
Larry: I go to the back of the train with them, and 表示する them this. *Shows a fake Movie Director ID* I tell them that I want them to act in a movie, and during that, あなた check their cases to see if they have any info going against us. After あなた find it, we kill them.
Adrenaline: Sounds good to me.

The train arrived, going backwards alongside the station platform. 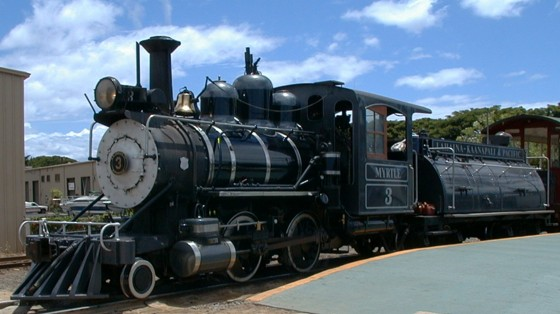 This is the engine, pulling four yellow coaches

Larry: *Sees the train back into the station* This is it.
Adrenaline: It's pretty early.
Engineer: *Stops the train*
Ponies: *Getting on board*
Larry: *Watches the black ponies get on, and he boards the train getting on the same car that they're on*
Adrenaline: *Follows*
Conductor: *Watching everyone get on the train* All aboard!
Engineer: *Blows the whistle twice, and drives the train*

With the engine slipping fiercely, the train slowly leaves the station.

Engineer: *Moves the throttle up, then back down, stopping the wheel slip*
Adrenaline: Okay Larry, ready when あなた are.
Larry: *Nods, and walks to the black ponies, grabbing his ID* Excuse me.
Black Ponies: Yes?
Larry: I was wondering if you'd be interested in trying out for a movie. The both of you.
Black Ponies: Alright.
Larry: Follow me to the back of the train, and leave your things here. *Points at Adrenaline* My associate will watch them for you.
Black Ponies: We appreciate it.

The three of them go to the back of the train.

Adrenaline: *Starts looking through the cases*
Larry: Now, what I want あなた to do is take your hats off.
Black Ponies: *Take their hats off*
Larry: You're going to take turns wearing my glasses. I want to see who will fit the role of the protagonist best.
Black Ponies: *Taking turns wearing Larry's glasses*
Larry: *Points to the one on the left* You. I like you, but there's a few もっと見る things we must do before I select one of あなた for the role of the main character.
Black Pony: Man, I thought it was called the protagonist.
Larry: Same thing.
Adrenaline: *Closes the first brief case* (Nothing in here but a bunch of papers) *Opens the 秒 one*
Larry: *Takes back his glasses* I got a few lines for あなた to say.
Black ポニー 2: What?
Larry: I want あなた to say, there's too many suspects that deal with narcotics nowadays.
Adrenaline: *Keeps looking*
Black Pony: There's too many suspects that deal with narcotics nowadays.
Larry: Good, good. *Looks to the right, and sees Adrenaline* (What the hell is taking so long?)
Adrenaline: *Finds some pictures* These look pretty important.
Black Pony: Mr. Wilcox?
Larry: *Pays attention to the black ponies* Oh, sorry. Where were we?
Adrenaline: *Closes the case*
Larry: Okay, I remember. Um, the 次 line is.. Give me a second, I'm trying to remember. *Looks at Adrenaline*
Adrenaline: *Mouthing the words, I'm done. What do we do now?*
Larry: Oh, I remember now. あなた gotta shout for this one. It's.. *Looks at Adrenaline* GET OVER HERE!!!
Adrenaline: *Comes in* あなた called?
Larry: *Laughs* Oh, I'm just giving these guys their 次 line. *To the black ponies* Please wait here while I talk to my associate. *Slowly walks away from the black ponies, keeping an eye on them, and quietly talks to Adrenaline* What did あなた find?
Adrenaline: Some 写真 *Shows it to him, without the two ponies seeing*
Larry: *Looks at them* That's us in one of them. Every other 写真 looks like a member in our family dealing with drugs as well. Those two are the ones we have to kill. Take the one on the right. *Walks back to the black ponies with Adrenaline* So gentlecolts, here's what I want あなた to do next. *Punches the black ポニー on the left, and pushes him off the train*
Black Pony: Ah! *Rolls down a hill, and dies*
Adrenaline: *Does the same thing to the other one*
Larry: When this train stops, we'll get off, and tell Castalini about the good news.
Adrenaline: Alright.

7
Then she got an idea...
added by btflash
Source: Some guy on memebase; also hasbro