Billboard honors Madonna, hints at the future
posted by Joy3570 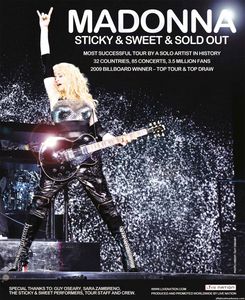 Billboard magazine has released a special double-issue celebrating the end of the 2000s decade, which includes a segment dedicated to Madonna's biggest achievement of the decade, the record-breaking success of the Sticky & Sweet Tour. She gets a lot of congratulations for the biggest solo tour of all time, including from her own manager Guy Oseary. Her 50 biggest hits on Billboard are also listed, Like A Virgin being in the pole position.

There's also an interview with the manager, Live Nation's Arthur Fogel and a Warner Bros. Recods Chairman/CEO, Tom Whalley. Arthur Fogel says the 2008-2009...
continue reading...
1
Physical single formats of Revolver announced
posted by Joy3570
Turns out Madonna's final single under Warner Bros is going to get a physical release after all. Warner 音楽 Netherlands (via Madonna.nl) announced the tracklist of Revolver:

Despite all the new pop starlets out there trying to jump her train, マドンナ definitely was not slackening the pace. When she dropped Music, she was older than Britney and Christina combined, yet she took them to school with vintage electro-boom, Eurodisco flourishes from French producer Mirwais, and her own inimitable sass.
New US Celebration certifications
posted by Joy3570
Even though Madonna's current greatest hits album Celebration is already out of the Billboard 200, good news is that it has just become another ゴールド album for her, certified によって the RIAA for shipping at least 500,000 copies (in shipments, a double CD counts as two copies). With this addition, マドンナ is certified for 64 million albums in the US, which still keeps her at the 秒 place among female artists, between Barbra Streisand (71.5 million) and Mariah Carey (62.5 million).
Moreover, the Celebration Video Collection also gets a certification, Platinum for shipping 100.000 double DVDs, very impressive for a video compilation in this era!
More Cards
12345678910111213141516