Natsu shares the closest friendship with Lucy among all other members of Fairy Tail.
Their deep bond stems from the fact that he had been responsible for inviting and bringing her to the guild, and eventually teamed up with her to form Team Natsu. While Lucy often gets irked によって Natsu's destructive and impulsive nature, she is also greatly amused によって his childish antics. Much to her chagrin, Natsu frequently drops によって Lucy's ホーム unannounced, and once even fell asleep on her bed, waiting for her. He believes Lucy is a strong person even if she herself doubts her abilities.

They are very close friends, the extremity of which was seen upon Lucy's capture によって the Phantom Lord Guild, when she jumped offPhantom Lord Headquarters's sky prison, knowing that Natsu was there and that he would catch her. It has also been stated によって Happy that Natsu cried at the thought of Lucy leaving Fairy Tail. After her fight with エンジェル of the Oración Seis, Lucy tries to save Natsu from the rapid currents to the point of not letting him go when they fell off a waterfall. When Lucy was sick and couldn't go out for the モクレン, マグノリア Town's Blossom-viewing, Natsu uprooted one of the trees and released it on a ボート just for her to see.


Erza Scarlet
Being members of Team Natsu, Erza and Lucy are good friends. When Lucy first met Erza, she feared how strict and demeaning Erza could be. Despite that, Lucy did not regret going on a mission with her.After Team Natsu was formed, Erza and Lucy became closer and their friendship grew. If unable to 登録する a fight, Lucy would cheer on Erza instead. Despite Erza's strict personality, she shares a typical girly relationship with Lucy.
In the Phantom Lord arc, Erza was the one to endure the worst blows in order to protect Lucy. She single-handedly stopped the full power ofJupiter, therefore received a considerable amount of damage, and still proceeded to engage in battle with the strongest member of Element 4,Aria of the Heavens. Immediately upon defeating him, Erza faced off Phantom Lord's Guild Master, Jose Porla, where she discovered the truth about Lucy's kidnapping, and replied saying that no one could know how much Lucy has suffered.
During the Tower of Heaven arc, Lucy was the one who encouraged Erza to reveal her past, saying that her フレンズ can help her. After hearing Erza's story, Lucy became determined to help Erza, facing Vidaldus Taka and an evil Juvia Lockser in the process. In the aftermaths of the arc, Lucy is the only person whom Erza conferred with, the thought that Jellal Fernandes was the one who saved her and the others when theTower of Heaven was about to explode, implying that Erza trusts Lucy very much.


Gray Fullbuster
As both Mages belong to Team Natsu, Lucy and Gray get along very well.
Lucy is usually taken aback によって Gray’s stripping habit, but can also find it amusing at times. Along with the rest of Team Natsu, Gray often visits Lucy’s apartment without her invitation, and this seems to irritate her but she doesn’t appear to be genuinely bothered によって the intrusion. Gray also finds Lucy to be strong which is shown when he tells her not to cry because she is better than that. He also once 発言しました that she was "pretty pure hearted".
Gray cares a lot for Lucy as seen when he vowed that he would rather die than hand her over to Phantom Lord during the Phantom Lord arc. He was also concerned for her when she mentioned that she thought she was being followed at night によって a stranger; so much so that he followed her himself to be sure that she would be safe.
During the Oración Seis arc, when Gemini took the form of Gray, they chirped out information that they had gathered from him. Gemini's extraction of information from Gray are as follows; Newcomer to guild, Pretty damn cute, Possesses some skill (in japanese anime, he was saying "somewhat interested in her"), もっと見る naive than she appears, stellar spirit mage.

Happy is one of Lucy's team mates and one of her first フレンズ from Fairy Tail. He plays pranks または teases Lucy most of the time, often calling her "idiot" または "heavy", much to Lucy's annoyance. He also teases her whenever she is with Loke, rolling his tongue while saying "he likes you". Happy, like the rest of his team, also has a habit of going to Lucy's apartment without her consent, a habit that Lucy had learned to get along with. Despite all this, Happy and Lucy are really close フレンズ and care for each other deeply as seen when Happy was crying when he thought that Lucy was leaving the guild. The two can also be seen together during most of their missions, with Happy giving Lucy support and advise.


Levy McGarden
Like many of the Fairy Tail Guild members, Lucy shares a close friendship with Levy. In fact, Lucy's closest friend outside of Team Natsu is Levy.
Their relationship is such that they affectionately address each other as "Lu-chan" and "Levy-chan". Thus far, Levy is also the only person that Lucy has allowed to read her secret novel, proving the Celestial Spirit Mage's immense faith in her. Similarly, Levy also trusts Lucy, and even shared the fact that Erza loves racy novels.
Because of their close friendship, Levy does not like to go against Lucy in whatever manner, as seen when she apologized for getting off the ボート to Tenrou Island first, despite it being the primary objective of the first trial.


Juvia Lockser
Juvia and Lucy first met each other as members of opposing guilds in the Fairy Tail-Phantom Lord war where Juvia was ordered to kidnap Lucy. Juvia later falls in 愛 with Gray and, because of a misunderstanding, begins to harbor a one-sided 愛 rivalry with Lucy. The two later reconciles during their battle with Vidaldus Taka, as Lucy was the first Fairy Tail Mage aside from Gray to accept her as a friend. However, Juvia still plays pranks on Lucy, like giving her chili スープ instead of tea, because she still thinks that Lucy is after Gray.


Cana Alberona
Lucy and Cana are guildmates and very close friends.
Cana and Lucy got along well during Lucy’s early days at the guild. However their strong relationship had only begun to truly grow during the Tenrou Island arc. Cana had turned to Lucy for help and support about her problems with the S-class Trial and her father. She showed up to Lucy’s ホーム unexpectedly, but Lucy replied that she was there to listen, 表示中 their strong trust with each other.
When Lucy saved Cana from freezing in the snow the two had a ハート, 心 to heart, wherein Cana revealed her biggest secret which both demonstrated and enhanced their relationship with one another, as shown when Lucy burst with emotion at how she would help Cana during the S-class Trial.
In the midst of the first portion of the trial Lucy was seen risking injury so that Cana could proceed to the 次 round and this shows how close they are when one is willing to sacrifice themselves for the other. During the 秒 Part of the Trial (to find Mavis Vermilion's grave), Cana got desperate because it was being interrupted. After she makes Lucy tell how to find the grave, she leaves her unconscious so no one would stop her from completing the Trial, but apologizing for doing that. When Lucy wakes up and during the rest of the time before they meet again, the only thing Lucy was thinking about was to find Cana, 表示中 that Lucy would never think bad about a friend.
Cana later regretted what she did to Lucy, and decides to never betray a friend again. After the Grimoire ハート, 心 incident, Cana apologized to Lucy, which Lucy kindly considered as a "prank", 表示中 that she don't hold grudges against friends. After that, Lucy even helped Cana, encouraging Cana to tell the truth to Gildarts.

Even before Lucy joined the Fairy Tail Guild, she has idolized Mirajane because of her widespread fame and beauty. When she joined the guild, Mirajane was one of the first people to greet her. Lucy often tells Mirajane about her problems and looks up to the latter for advice, trusting her enough to tell her about her 愛 problems, which Mirajane often teases Lucy about. Mirajane also looks out for Lucy and helps her out as much as she can, even reserving a job for her.

Lucy is characteristically similar to Wendy, which provides a good friendship between them. When Lucy first saw Wendy, during the fight against the Oración Seis, she was shocked that a child could 登録する a team that will fight against a such powerful Dark Guild. After the explanation of the team's plan, both of them stated that they aren't very good at fighting. Wendy's abilities were acknowledged によって Lucy when Erza was poisoned によって Cobra. Lucy, alongside the other members of Light Team, put their faith into Wendy to save her. When Natsu brought Wendy, Lucy demonstrated respect for her, bowing and pleading to her save Erza. However, Lucy knows about Wendy's lack of fighting power and cares for her safety as she tells Carla to take Wendy out during a fight. After the time skip Lucy and Wendy kept this similarity, as seen when Makarov chooses them to compete in the Grand Magic Games.

\
During the guild war between Fairy Tail and Phantom Lord, Lucy is kidnapped によって Gajeel for the purpose of being used as a bargaining chip for Jose Porla, so that he could take advantage of the large amounts of money Lucy's family possess.
Whilst abducting her, Gajeel shows no remorse in brutalizing Lucy, harshly kicking and hitting her, as well as even chaining her to a ウォール to allow him to practice his knife-throwing skills. Whilst performing the 発言しました tasks, he also verbally attacks her, calling her "eye candy" and "bitch". Gajeel also seems willing to take Lucy's life, despite it being against his masters orders.
After learning that Gajeel has been allowed to 登録する the guild, Lucy expresses her instant surprise that the master could even consider letting him join, but after seeing Gajeel's もっと見る relaxed personality, the two seem to be on better terms perform with Gajeel The two have a habit of interacting when Gajeel performs on-stage, with Lucy generally being dragged up to dance alongside him in her bunny outfit. Lucy is also -unbeknownst to her- the reason Gajeel agreed to enter the Grand Magic Games, as the winning team between the two teams of Fairy Tail will be allowed to order the other team around for a day. Upon hearing this, Gajeel visualizes himself demanding her participation in one of his concerts, making her once again dance alongside him whilst he plays.
While Lucy is visiting Fairy Tail's aquatic park Fairy Fountain, Gajeel comically encourages her to try his exclusive pool "Scrap Metal Hell", with Lucy instantly rejecting the idea, due to the pool looking like a torture pit.
fairytail1155, 09472791189 and 1 other like this
evilme1221 lol gajeel 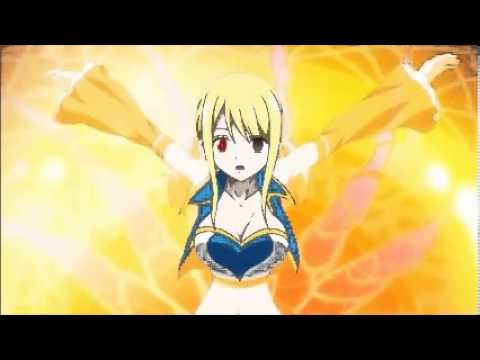 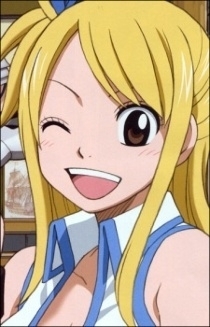 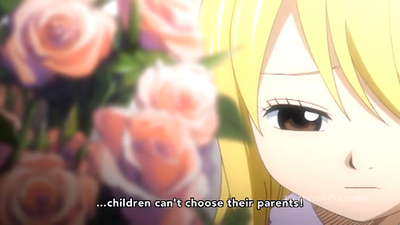 1
All that I have of Lucy
added by pjwoww 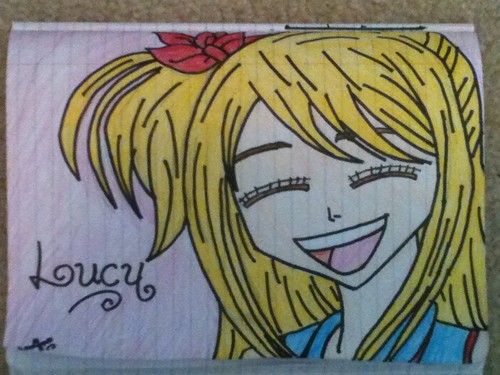 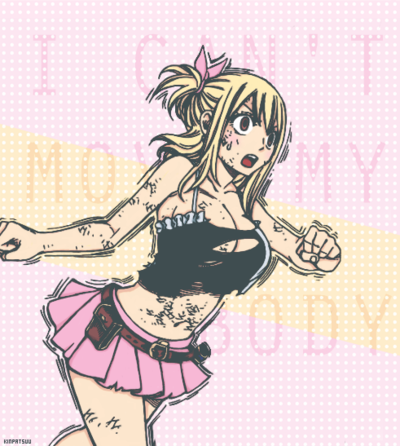 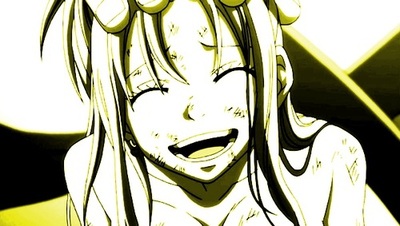 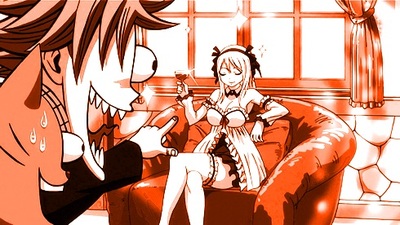 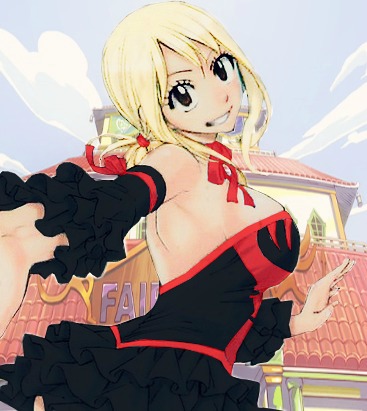 come wit me
added by Nalu-love 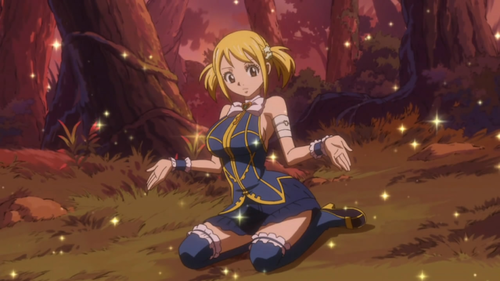 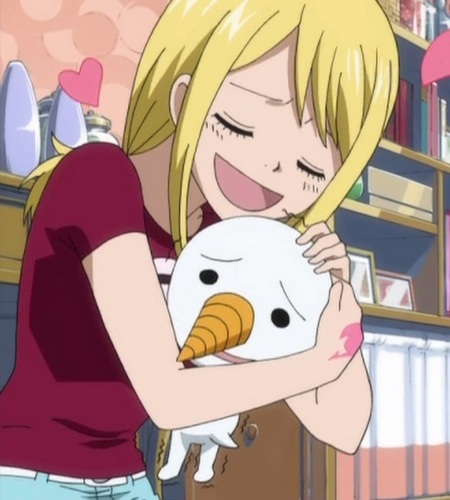 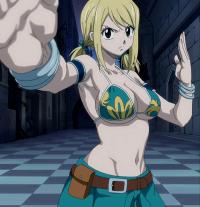 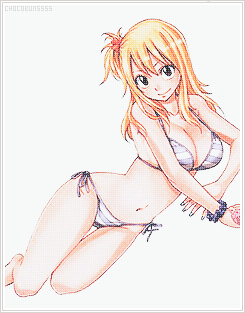 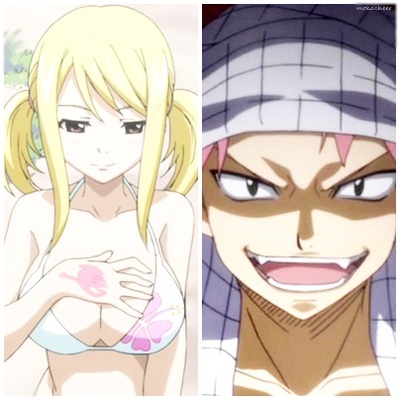 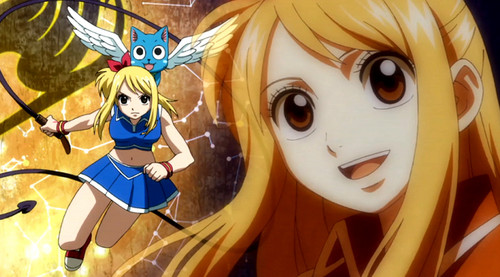 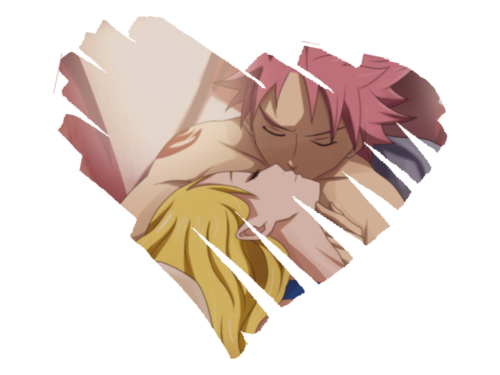 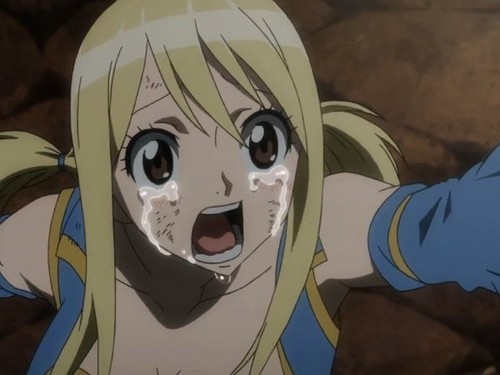 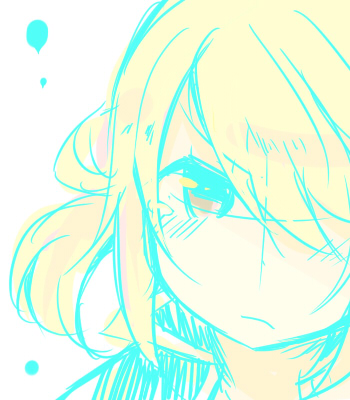 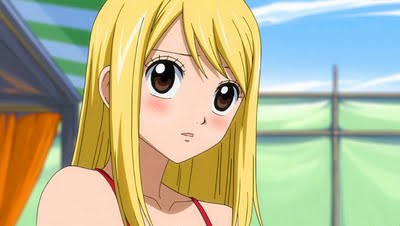