I woke up as I lifted my head and opened my eyes. I saw that my parents were already awake, but Stinky and Claudette were still sleeping. "Good morning son," Dad said. "Good morning あなた guys," I yawned as I walked towards them rubbing my eyes. "You excited for the Moonlight Howl tonight," Mom asked. My eyes shot wide open as I just remembered that tonight was a special night. "I almost forgot it was tonight," I said. "I can't wait to go with Magril."

Both of my parents chuckled. "Yeah. I remember me and your father's first Moonlight Howl after we got married," Mom 発言しました snuggling in my dad's chest. "It was one of the most beautiful moments in my life." "The only moment greater than that was when あなた and your brother and sister were born," Dad said. "Wow. I hope my 日付 with Magril will be just as magical as yours." "I'm sure it will be honey," Mom replied. The three of us starting to talk for a while.

"Man I can't wait till the Moonlight Howl," Claudette 発言しました gleefully. "I wonder where Fleet will take me?" I could tell was going to have a ball with Fleet. "So Stinky あなた excited about your 日付 with Artemis," Dad asked him. "Well I have to admit I'm a little nervous about it," Stinky responded. It made sense that my brother was anxious about how he'll spend the Moonlight Howl with Artemis. Stinky didn't really know much about Artemis so far, but tonight can help him learn some new things about her.

I started to wonder about what me and Magril should after we're done stargazing. Most likely she'd still want to do something afterwords. Hmmm I'm not sure what she'd want to do. I decided to see if I could figure it out later while in the meantime I'll hang out with Magril and the others later today.

"Hey Mom, Dad can we hang with the others before we prepare for tonight," I asked them. "Sure honey," Mom said. "Come on guys," I 発言しました to my brother and sister. The three of us headed to the Northern Pack. Hopefully I could think of something to do with Magril aside from stargazing. While we were walking we spotted Agnes eating a piece of 木, ツリー bark and Brent eating berries from a ブッシュ that was non-fermented. We decided to greet them both.

"Hey あなた guys," Stinky 発言しました to them. "How's it hanging?" "Oh hey, me and Brent were just treating ourselves to breakfast," Agnes 発言しました eating the bark. One thing that we found weird about was how she was able to eat 木, ツリー bark. Supposedly porcupines are able to digest the bark. I wonder how Agnes even likes the taste. "We were just heading to the Northern Pack right now. あなた wanna come," Claudette asked. "We'll head there later," Agnes said.

With that the three of us continued to the Northern Pack. I was still wondering on what to do with Magril during the Moonlight Howl. We'd probably get bored with it after awhile. I decided to see if my sister could see if they help me out. "Hey Claudette can I talk to あなた about," I asked my sister. "Umm sure," she said. "Stinky just walk ahead we'll catch up with you." My brother proceeded to walk without us.

"What did あなた want to talk about lil' bro," my sister asked me. "Well I wanted to ask あなた for advice," I told her. "I need help on what to do with Magril tonight." "Ahhh I see," she said. "Well first off what does she like to do?" I began to think about what me and Magril would normally do together.

It took me a while but I realized a few things she loves to do. "Well she's really interested in climbing trees, she and I were going to stargaze a bit, and she loves to play around," I told my sister. Just then I realized anything she loved to do, but I decided to keep it hidden to myself. "That seems like enough to fill in the night," Claudette said. "Just remember to be considerate about Magril. Women hate men who are self-centered and self-absorbed." "You don't have to tell me twice," I said. The two of us laughed.

"Come on let's catch up with Stinky," Claudette said. We sprinted フォワード, 前進, 楽しみにして in the direction where Stinky was walking in. "Hey Claudette thanks," I 発言しました to her. "Oh thanks," she 発言しました as we smiled. I was really lucky to have my family.

So that was Chapter 23. Sorry if it was short today. I'm starting to have writer's block and I'm sometimes exhausted from school especially since it's starting to get warmer in New Jersey. I'm also going to have a bunch of storylines surrounding the Moonlight Howl later on so the story might go past Chapter 30. If anyone is an expert at Tarot Cards, do あなた mind PM me because I need help with my future crossover. Also if any of あなた guys aren't already 読書 it, I wanted to suggest LoverWolfs1121's story A Warrior's Death and his other stories. Well cya later.
OnlyKate pretty good
simmy240 This is actually really, really good :D
1
Young Love: Chapter 20
posted by Kitsune32
Here's Resolution Part 2. こんにちは anyone wanna send OC's for my future fanfiction? Also just hit 3000 閲覧数 on . Oh just to add, Fleet's the only one in his family who's come to terms with his mom's death. If any guys want あなた can make a story about it. If あなた want to make this Chapter もっと見る dramatic, listen to Living with Determination from Persona 3. Not the Iwatodai Dorm version.

The seven of us finally arrived at the Western Pack as we saw Runt, Stinky, and Claudette in the valley. "Hey guys," we heard Agnes yell to them. They turned around and smiled at the sight of us. "Oh hey,"...
continue reading...
1
Young Love: Chapter 19
posted by Kitsune32
Ok so this Chapter will focus on Magril and her family. Also Sundays may be my days of as well and can someone help me assign arcanas for my future crossover? Here's Chapter 19: Resolution Part 1

My family and I were playing in a flowery field. My brother and I were playing a game of tag, while my mom and dad were watching us while snuggling. Fleet was running after me as the four of us heard a rustling near the trees. Fleet and I then ran towards our parents as they went into defense stances. Out of school 木, ツリー came a tall creature standing on two legs. It was wearing some weird...
continue reading... 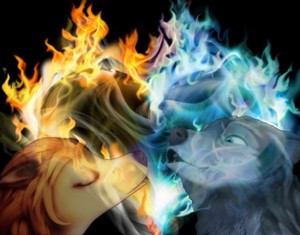 Magril and I were talking Stinky and Claudette when our parents called for us. We left Stinky and Claudette as they talked to each other. The two of us went to my parents. "Did あなた guys want to talk about," I asked them. "Yes, it's about the snuggling and kissing," Mom said. "Could あなた two try to decrease the キス and nuzzling?" "We're sorry, but we think that あなた two are too young for it," Dad said. "We don't mean to try to suppress your guys feelings for each other," he added with a bit of guilt in his voice. I actually understood why...
continue reading...

I woke up and found my dad and brother were already awake. "Hey sis, did あなた sleep," my brother asked. "I slept perfectly. I had a dream Runt and I were nuzzling each other in a big den," I replied. "Must be great having Runt as a boyfriend now right," my dad asked. "Yeah it is," my stomach growled loudly. "I'll go get us some food," my dad said. "So Magril maybe one of these days, you, Runt, Claudette and I should have a double date," Fleet asked. "Sounds like an awesome idea," I told him.

Just then my dad came with two a caribou and... Runt. "Hi...
continue reading...
1
Young 愛 Chapter 5
posted by Kitsune32
Sorry for the wait. I'm juggling another story. Here's Chapter 5.

Humphrey was the first in the デン to wake up. As he got up slowly to prevent his family from being woken up, he noticed his youngest pup Runt was missing. He automatically assumed Runt went to get a drink of water によって the stream. So Humphrey decided to head to the stream as well. When he got there he didn't see a trace of Runt anywhere. At this point Humphrey was getting worried. His son was already pup-napped (sorry for the lame pun) once. He kept his cool to prevent himself from jumping to any conclusion. Humphrey...
continue reading...
3
Young Love: Chapter 2
posted by Kitsune32
A/N For now on I'll put the story in a POV Format. The POV's will be if Runt and Magril and maybe other characters.

Magril's POV
It had been two days since the Hide and Go Seek game with Runt, Claudette's brother. For some reason I felt the need to look back at him when Fleet and I were leaving. Though the strangest part was the feeling I had in my chest. There was also the dream I had. I was in a field with a grey pup. I couldn't remember every detail though. Well anyway I had just woken up and saw my brother and my father Nars asleep. I decide to go get a drink of water によって the stream. 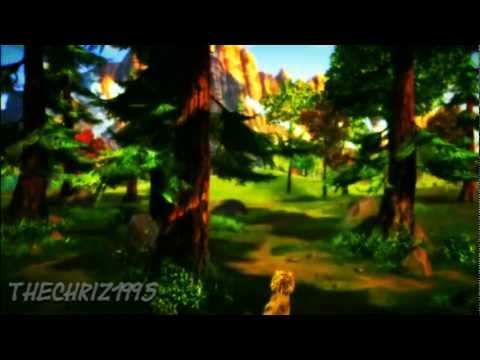 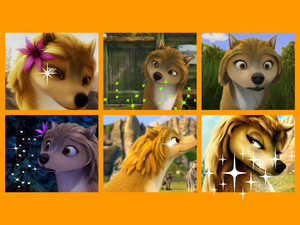 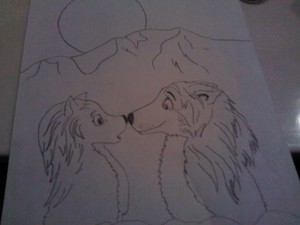 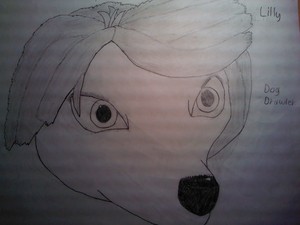 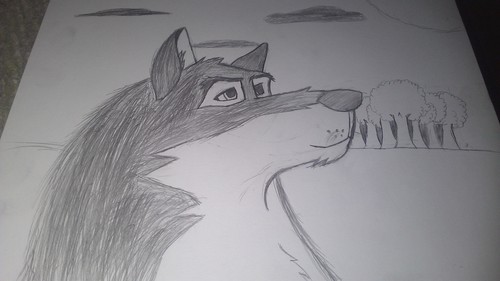 2
This is Balto
added by trueshadowwolf
Source: Me 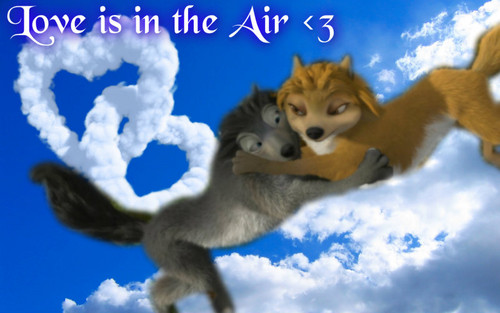 6
愛 is in the Air
added by HUMPHRY
Source: HUMPHRY 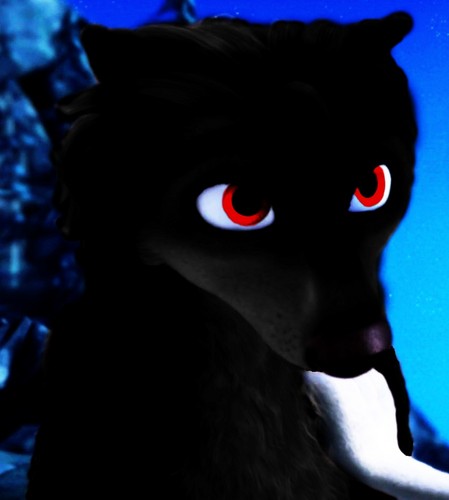 3
shadow with garths muscles and figure
added by darkalpha 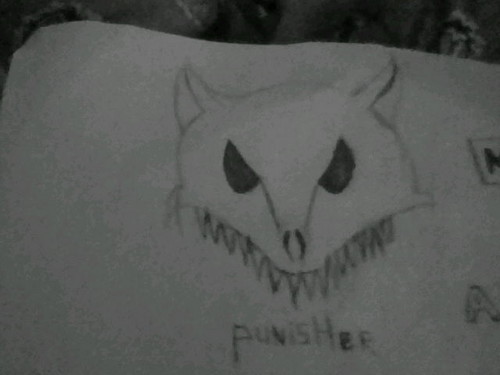 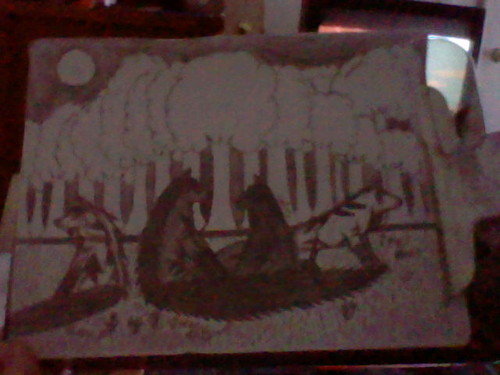 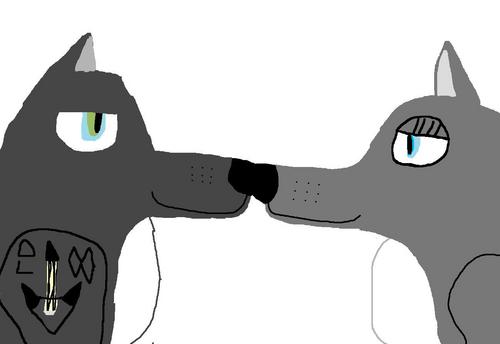 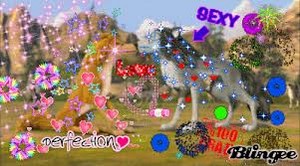