Have I met the right one? 4
posted by uniquezandy
Bellas pov
Me and Edward had to quickly spring apart, but we couldn't hear who the smug voices belong too. All we heard was, "Well... well... well." That made me a bit nervous. But Edward comforted me and whispered, "Don't be scared, they are my siblins. They loved to be proven right. How about we trick them?" I was confused, but I didn't need to see his smile, because when he 発言しました it I felt it. The voices, tried to come closer, but we were out of the school building faster than あなた can say missisippi. In no less than 1 minute, we were wondering the woods. I had to ask a few questions. "Why did, あなた hate me, when I introduced myself at the table? I didn't know it was you." I spoke. he answered me, looking extreamly hurt. "I was pretending, but at first, I didn't know it was you. And I don't hate you. If I did, do あなた think, I would キッス you?" It took me a while to think, it all makes sense now!
"Are あなた a vampire?" He asked me. How did he know? "Yes, but how did you-" He straight away answered me. "I am one my self. The day, I died; some girl with オレンジ hair was in my room. I was bitten, and somehow I am alive in a way." Wow. I just felt... words could not describe.
"A girl with オレンジ hair bit me aswell. So then, I knew I was one too. But I don't have a family like yours. I am on my own." I informed. "They took me in, after, my family, died of spanish influenza." He whispered. Now I think, that has covered everything. "At least, I still have you.You are family to me, and I thought あなた would have died によって now. If あなた did, I would have no reason for my existense." He spoke so lovingly.

We were having fun, catching up on the last centuary. It was a bit awkward, so I kept nodding and smiling. But then he asked me something. "Bella, do あなた still 愛 me?" He asked so serious. "Of course Edward, あなた know I do." I replied. I was confused why he asked me. "Because, before my family enrolled in Forks high school, I reached in my pocket, and found the engagement ring I gave you. I knew what happened, and あなた thought, that we couldn't marry because I was dead, I don't blame you. But when I found it; I was shock. I thought あなた hated me and didn't 愛 me anymore." If ヴァンパイア still could 表示する emotions; I bet he would cry.. "Edward, I know what I did, I thought あなた were gone. But everyday, I kept thinking abput you. I never stopped loving you. あなた are my Edward Mason." And I gave him a キッス to prove it. "Can あなた do me a favour? Could あなた wear the ring; as a token of my 愛 for you." This was a commitment, I was surprised he asked. "I will." A smile was on my face as he slid it on my finger.

Unfortunalty, happy moments, don't last long, because we heard a noise. We bounced on our feet and listened. "What was that?" I asked loudly. I was scared. Something, または someone was running around us. It must be a vampire. But then; I saw a glimpse of the bright, オレンジ hair that made me want to scream. "Hello, remember me, Edward Mason and Isabella Swan?" The vampire was facing us; in the flesh. "Who are you?" Edward asked. "I am Victoria, your creator. あなた and your lover were my two singers 100 years ago." She informed. I didn't like her attitude and I knew that this was going to get ugly pretty fast. If I was human, Edward would have a hard job to protect me and fight at the same time. But since I am a vampire...

If I was human, everything would be pitch, coal black. But since I am not everything was vivid. Edward, used his power to read her mind; to see what 移動する she would use. I used my shield to protect him and myself. There were punches, kicks, flips, basiclly everything あなた would see in an action pack fight scene. But it didn't last long because she was powerful. Somehow miracles happened, as the rest of the Cullens, came to help. I was weak, (smacked on the ground,) but I could see everyone else fighting.) I was weak, but Carlise saw me, and decided to help me. I don't know him, but he was nice. After the biggest fight that happened. I looked around; to see no one. Can ヴァンパイア just drop dead? I saw nothing, and if I did; it was a blur. But I could just make out the voices.
"Is she dead?" That could be Alice. "I don't think so, but she looks very bad." Carlise spoke. "It will be ok." Emmett comfoted. "Edward, あなた chose, not to live with out her. Alice already saw and knew her story. It will be ok." It was a voice that was unfailliar. "Esme is right." Rosalie agreed. I guess it is the mother. I could just picture, how it is. Just now, how Edward was dead, everything went black.

Am I dead?
It's now a fight to life and death. Before, I met Edward again, I wouldn't mind dying, but now; I have reason, to be wanting to live. Any second; I am wishing and praying to wake up. Please I believe I can live. It's do または die. Slowly, my eyes, started to open. Thank God. I feel 100% better already. I feel; like I could run 100 miles. But I look around to see no one. Where is everone? And where am I? I am in a hospital, によって the look of things, but I took a step out and its a huge house. I'm guessing this is the Cullens house, but it looks もっと見る like a mansion. I stopped, and overheard someone talking. It sounds like Edward is in pain. "Edward, it will be ok. She is a vampire." Alice explained. I guess Edward must be in agony. "I know she will be fine, I just can't stop thinking about her. I just don't want her to die." He mumbled. Aww that is sweet. "Bro, she will be fine, come on, lets hunt, and check on her when we get back." Emmett spoke. "She will be fine, trust me, the emotion is hopeful." Jasper assured. "You lot go ahead, I'll catch up in a minute, I will check on her now." The others understood and he tried to make his way to see me. When he gets there; he would be shock to see me out of the ベッド missing. "Bella?" He yelled. "Bella?" He yelled a bit louder. "Bel-?" He was cut off, as I came out from hiding, and my mouth was decended on his. It had so much passion; that there was no need for a word to be spoken. He got the idea; I felt better and I would live on forever, but not without him...
shelly_fanpire AWESOME.....PLEASE write more soon
jacob_lover5253 omg loved it!!! 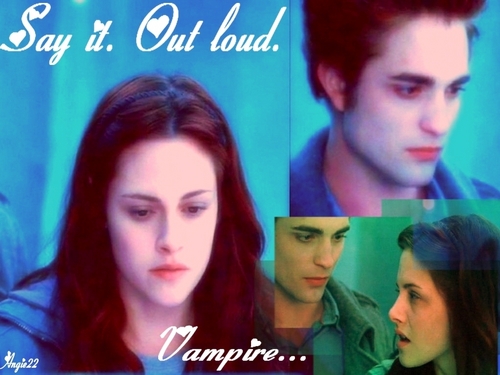 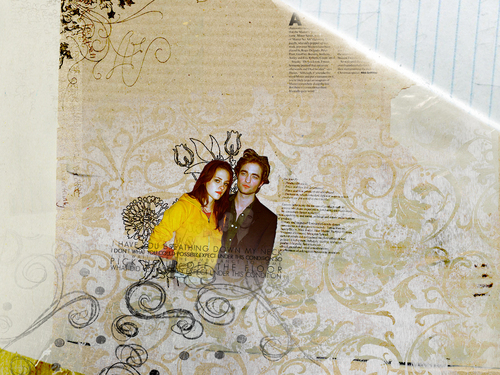 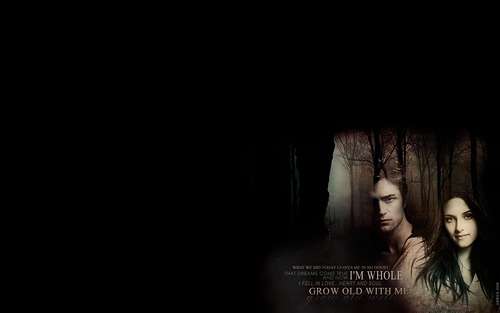 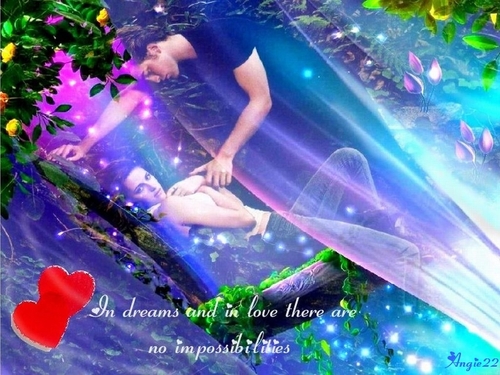 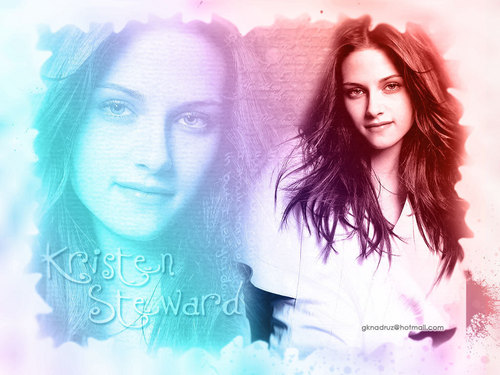 1
Twilight
added by funnyshawna
Source: me 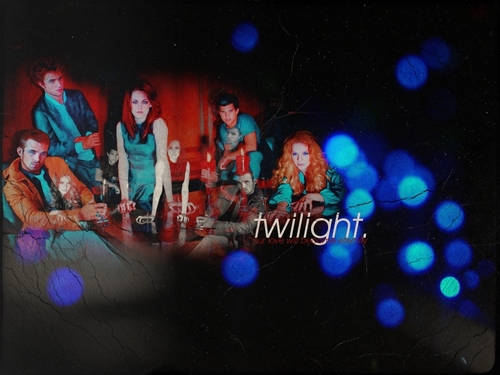 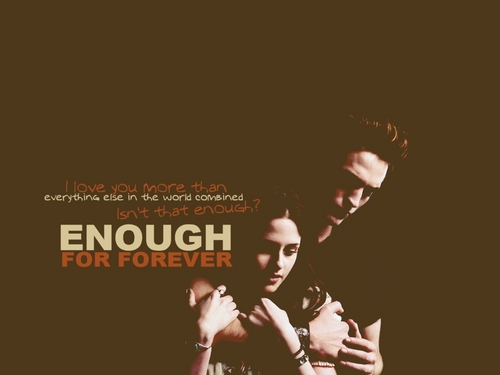 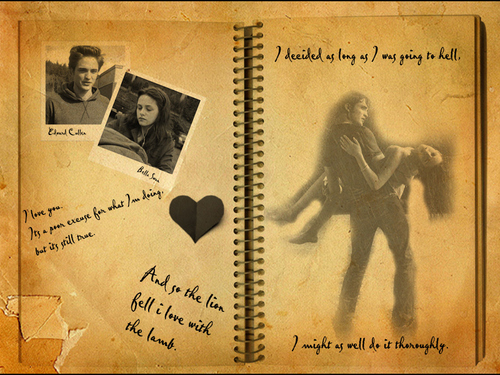