2
A mission, but it could be more. (Part 5)
posted by Icicle1penguin
Everyone landed in different places around the rainforest.

Marlene and Icicle stood-up and began to 検索 for everyone else.

"Uggh! What's up with Skipper?" asked Marlene, "He keeps messing with me and thinks that he can boss me around! What's wrong with him?"

"Uhh, girl." Icicle 発言しました while fighting through the leaves, "Don't あなた think that Skipper does that to protect you?"

"Well, sometimes. But still...Yea, whatever." Marlene jumped over the root blocking her way. "Why can't he see that I can take care of myself? I don't want him to think of me as a weak, damsel in distress. I want to be more."

Icicle stopped walking and stared at Marlene."Oooh, someone has a crush on a certain penguin." she teased.

"I'm sooo happy! Finally my cousin has a girlfriend! And not a doll!" cheered Icicle. あなた can see that she's still mocking her.

"Will あなた stop that!"
"Fine. C'mon, Skipper's probably waiting for us at the other side of this forest."

"It appears that we are in a rainforest." he replied, "Probably at the South East Asia Rainforest."

Skipper walked around, "There's an HQ located around here," he said, "Somewhere."

Julien was jumping from 木, ツリー to tree. "When are we getting to this HQ?" he asked. "After everything that's happened, I need to look in a mirror."

"Well we better get moving. Where do あなた think the girls are?" asked Skipper.

"According to my calculations, They're at the other side of the rainforest." replied Kowalski, "Rico and Private landed right in the middle. They're probably at the HQ によって now."

"Rico! We made it!" Private 発言しました and skipped inside the HQ. "...But where is everybody?"

Rico entered and looked around. Not a living creature in sight. Private looked at the throphy case. "Wow! Rico look!"

Rico waddled over and stared at the medals. "Wooow."

"Skippa' won awards for bravery, accoplishment, and a bunch of other stuff!" exclamed Private, "Look, he also has an award for defeating his boss in poker!"

Rico chuckled. They were paying so much attention to the awards that they didn't even notice the girl ペンギン standing behind them. "Excuse me."

"Gah!" They both jumped and when to their fighing poses. "Who are you!?" asked Private.

"I should be asking the same. Who are you?" asked the penguin.

"That's classified!" yelled Private, "But my leader is an agent of the S.A.L.O.P." Rico slapped him at the back of the head. "Owww..."

Private and Rico steped back. "How do we know you're not a spy of Dr. Blowhole?" he accused.

"How do I know you're not?" she said. "Ok, あなた guys are a bunch of rookies." カケス, ジェイ walked to the otherside of the room where the giant screen is at. He turned it on and the leader of the agency appeared. "Hey boss, who are these idiots?"

"Please don't be mean, Jay." 発言しました the leader, "They're part of Storm's team."

"Ok." The screen turned off and the female ペンギン turned around. "You're lucky. Now why are あなた here?"

Private walk towards her. "We were tossed out of the plane." Private said, "We're waiting for everyone to get here."

"It won't be long before あなた find your prince charming." 発言しました Icicle with a smirk. Still mocking. Ok, we get it Icicle.

"Ok! Fine, I like him!" admitted Marlene, "But we both know that he does not like me." There was a sad tone in her voice. She hung her head down.

"Ok, The HQ should be around here." 発言しました Kowalski."Ah, found it!"

They finally arrived at the HQ. It took a while for the door to open (a little rusty...).

"Guys! Hey!" greeted Private. He ran towards Skipper. "There's someone here for you."

カケス, ジェイ stood up from the red ソファー, ソファ on the corner. "Hello Agent Storm." she said, "You're assigned to a new mission."

"A new mission? I didn't even finish this one!" complained Skipper.

"Don't worry, we'll take care of it. Well, when the team gets here." she said.

Suddenly the door was knocked down. In came a penguin, 'bout the size of Skipper, with black curly hair. "Stupid door!"

"Sis? Hey, Myla!" Skipper ran to hug her, "I haven't seen あなた since...Well since that fight with Dr. Blowhole. Where's the necklace?"

Julien turned around. "Oh! Hello girl penguin!" he said, "I'm King Julien! the most handsome and best-ish member of his team!"

Everyone looked at Skipper.

Icicle and Marlene ran inside the HQ. "Uhh wasn't there a door here?" she asked.

"Well now that everyone's here," 発言しました Skipper, "Let's get to it."
SandMCLASSIFIED and ilovepenguins like this
cattoy10 i cant find the other parts anywhere did you delete them???????
yappy24 Where's everything else? 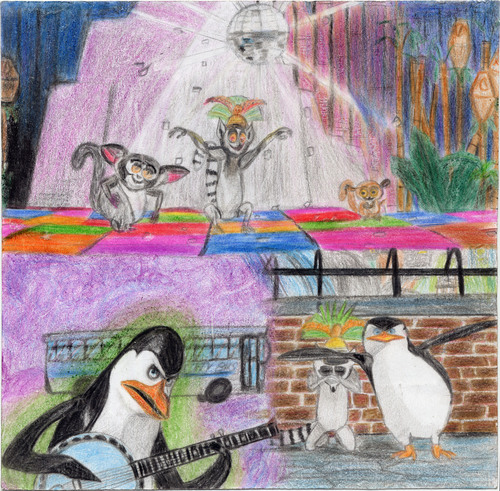 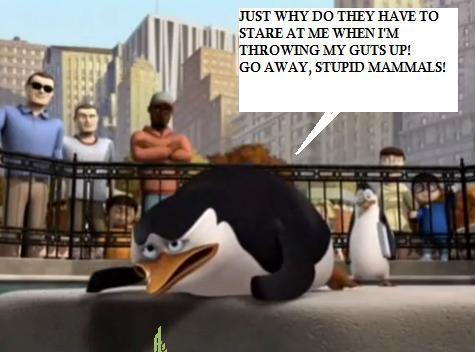 4
Bring on the Men!!!
added by jackandjill2
Information in comment!
video
ペンギンズ FROM マダガスカル
marlene
jekyll and hyde
bring on the men 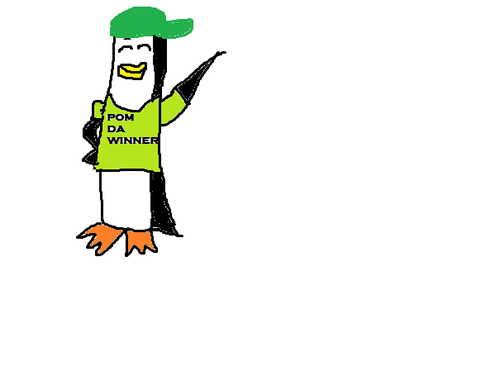 WEARING THIS シャツ WITH PRIDE
added by Colonelpenguin
Source: Me 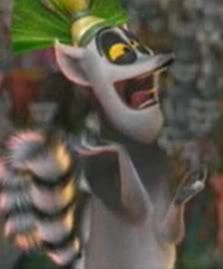 3
I command あなた to laugh.
added by peacebaby7
Source: I'm thinking "Merry Madagascar", but I'm not sure. 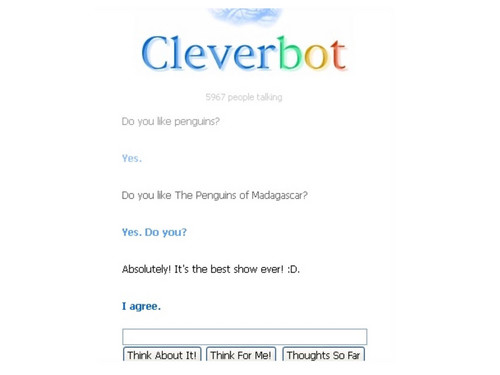 2
So, maybe I warmed up to Cleverbot.
added by peacebaby7
Source: cleverbot.com 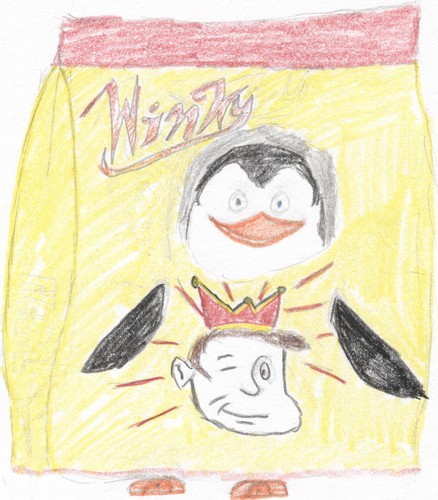 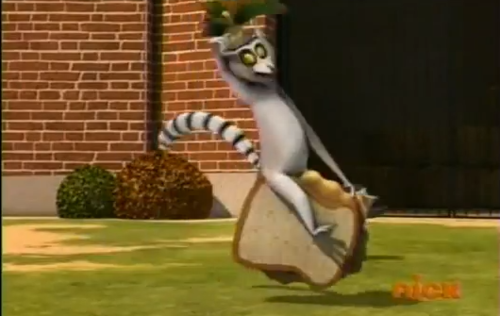 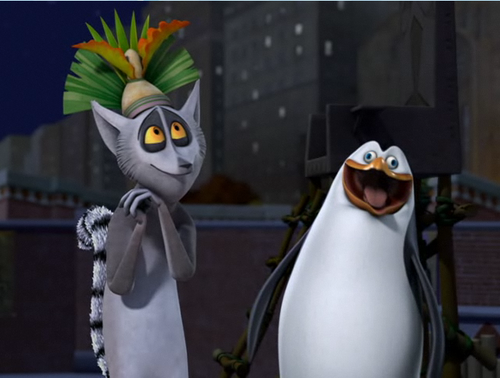 1
Mix 1 Cup of Adorability and A Pinch of Crazy...
added by Bluepenguin
Source: Kaboom and Kabust 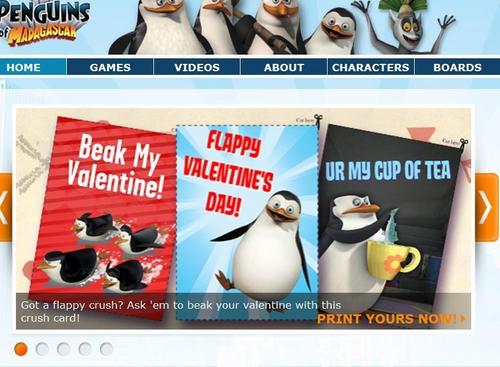 User: I am the king so あなた may worship me now.

Cleverbot: Not at the moment.

User: What?! How dare あなた defy me!

Cleverbot: あなた have no power here.

User: King Julien, which is me, always is having the power!

Cleverbot: If あなた say so Damian.

User: Damian? Who is this Damian?

Cleverbot: If あなた don't know, I'm not going to be the one that tells you.

User: Ew who would be eating souls? They have no flavor!

"Oh, あなた bet I am serious." I crossed my arms and raised my eyebrow.

"You can't be together." Finn said.

"Give me two reasons why." I frowned.

"One. You're a mammal and he's a bird," Finn paused. "Two. Skipper looks like one of those 動物 who'll just break your heart."

"Well, is that bad? What if he isn't one of those guys? What? Are あなた a racist against Skipper now? I thought あなた guys were friends?" I snapped.

"It's not bad and I hope he's not one of those guys and no he's not a racist and yes we are friends." Finn reacted as...
continue reading...
1
Taken (chapter 1)
posted by KowalskiGirl345
k:kowalski r:rico s:skipper m:marlene 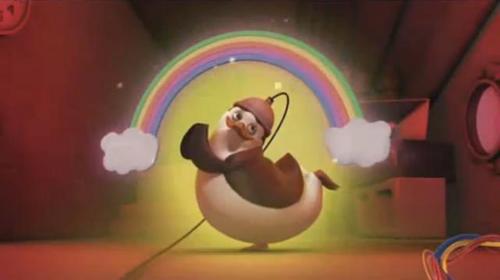 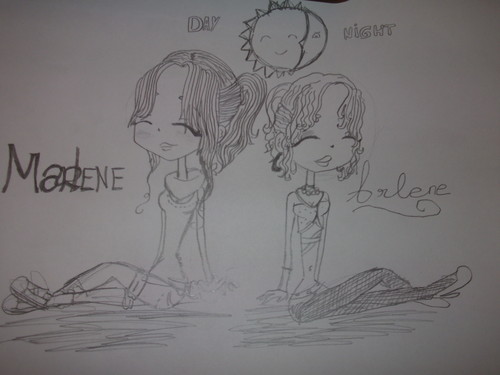 7
my little sister's 音楽 video to POM
added by kowalskig
the YouTube account is mine and her's we both put our 動画 on there. expect a POM video from me soon!!!! please no mean コメント she's new to video making and she's only 7
video
ペンギンズ FROM マダガスカル
skipper
kowalski
rico
marlene
maurice
More Cards
1234567891011