Post a pic/video of an アニメ character that あなた almost always get compared to.

I am constantly compared to Prussia! It's insane how many people say it! Keseseses!~


Prussia
Prussia was born to fight the same type of battles as Austria, but was a hooligan who did nothing but fight and found a means of escaping marriage. e loves fighting and will often say things in order to start quarrels. He will do anything to become strong, and has an arrogant attitude and a "world-sized ego". Despite this roughness in his personality, he is 発言しました to be "unexpectedly fairytale-like," too. Although he claims to enjoy being alone and that clustering is for the weak, he was brought to tears upon seeing Hungary and Austria together, though he admitted the tears were already welling up(however this was from his "love" for being alone and his "lack" of bitterness being surrounded によって couples in the streets.) It was stated that this loneliness stemmed from that he felt like an enclave rather than an actual nation. Despite feeling alone, he seems to have many friends, though when informed of this he gets rather quiet.

Germany once 発言しました that Prussia "knows little about common sense." This is supported によって Latvia commenting that Prussia was very punctual and never late for anything, very methodical, and very persistent in his diary writing, never missing a day. Latvia also 発言しました that Prussia "loots everything and opens all the drawers". He's been stated to be a hard worker, but his exterior shows an "Not gonna do anything" face Despite that he often seems to be lazy, he does seem to have his own work to do, または that he at least helps Germany with his, as he had a meeting with Switzerland about some important work. Prussia often affectionately refers to his younger brother Germany as "West," and hates Russia. It is revealed that he had kept diaries since he was formed, which led to him having an entire としょうかん, ライブラリ of journals. Almost all of them start with passages that read "I'm so cool/I was so cool today." He also seems to be fond of cute things, such as small bird 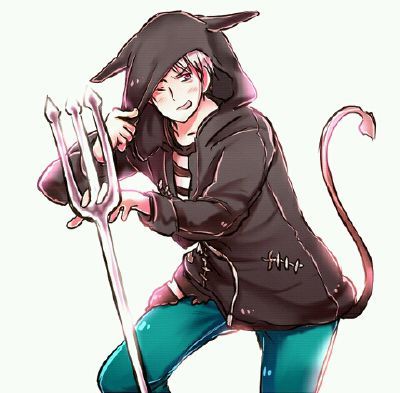 Thanks! >u< I just have waaay too many ヘタリア pictures on my computer. >u<
kid_symmetry posted １年以上前

It's okay! I just took my picture from the insanely large amount of ヘタリア 画像 I have! All of my American フレンズ say I apologize too much. O.o I guess I follow that British stereotype. >u< Thanks for answering!
kid_symmetry posted １年以上前

Tha's so cool! I look nothing like Prussia, but I just act the same way (sometimes) and wear the same kind of clothes that he is drawn wearing in many ファン drawings. >u< Thanks for answering!
kid_symmetry posted １年以上前
Hiding 2 comments... click to show.

I don't look close to mine :P and I'm not MALE!!!
barbiecat posted １年以上前

if ur like san then that means u hate humans toooo...right.........he he he he
KEISUKE_URAHARA posted １年以上前

Haha I guess humans are okay....^_^ Sometimes I get disappointed in the human race but I think 全体, 全体的です we try to mean well for the environment.
SweetMoonlight posted １年以上前
posted １年以上前